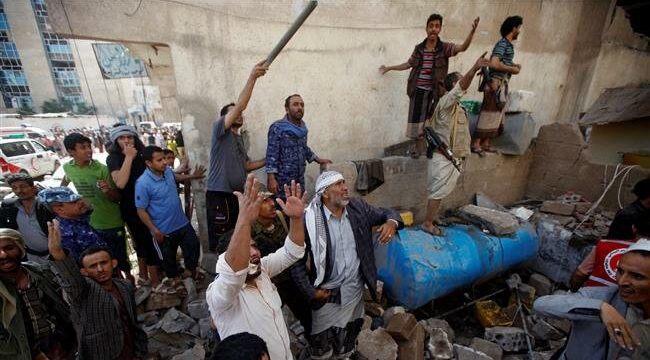 Press TV – Yemeni people have held a mass funeral for victims of last week’s Saudi airstrikes on the capital Sana’a, venting their anger at the bloody bombing campaign led by the Riyadh regime against the impoverished nation.

During Friday’s funeral procession, the mourners laid to rest the bodies of six civilians, including four children, who were killed in the Saudi attack on Sana’a’s Rukas district on May 16.

Yemeni journalist Ahmed Sharaf al-Selmy, whose four children Seham, Abdulrahman, Khalid and Wase’em, were among the victims of the Saudi air raid, denounced the brutal war on his country.

“The aggression on Yemen is unjust, may God exact revenge upon them. They killed my four children for no reason,” he said.

“This is a crime that must touch the human conscience. This criminal act undoubtedly proves that this aggression only strives to kill Yemenis, their women and their children and to destroy their houses,” he said.

The mourners stressed that the blood of the Yemeni victims would not be wasted and that those responsible for the killing would be punished sooner or later.

They further noted that Saudi aggression will only strengthen their resolve to confront the enemies.

Ansarullah warned that the strike ushered in a new phase of large-scale retaliatory attacks against 300 vital targets in Saudi Arabia and the United Arab Emirates.

Over the past week, Yemeni fighters have launched three drone attacks on the airport in Saudi Arabia’s southern Najran region. In the last retaliatory strike, a Patriot missile battery was targeted at the airport.

Saudi Arabia and its allies launched the war on Yemen in March 2015 in an attempt to reinstall the Riyadh-allied former regime and crush the Houthis — objectives that have failed to materialize due to Yemenis’ stiff resistance.

Since the war began, there have been tens of thousands of civilian casualties. Millions of Yemenis now subsist beneath the poverty line and hundreds of thousands of children are suffering and dying from malnutrition.

The Western-backed military aggression, coupled with a naval blockade, has also destroyed Yemen’s infrastructure and led to a massive humanitarian crisis.

May 25, 2019
Iran-China non-oil trade hits $8.8b in four months
Iran can sink US warships with ‘Secret Weapon’ – Iranian military official