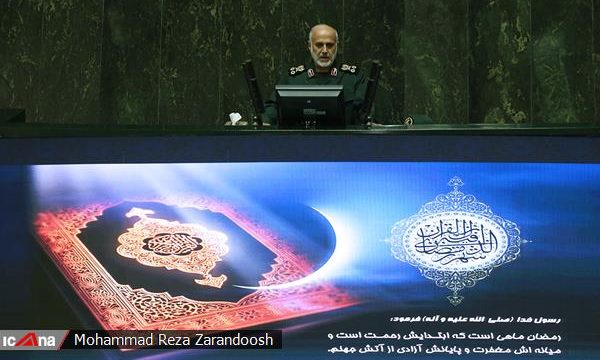 Enemy’s miscalculations about Iran’s power to be ‘costly’

MNA – Major General Gholam Ali Rashid, the commander of the IRGC’s Khatam al-Anbiya Headquarters, warned the country’s enemies that their miscalculations about Iran’s power and resolve will be costly for them.

He made the remarks during a Parliament’s session on Saturday, speaking on the occasion of the anniversary of the liberation of Khorramshahr during the war with Iraq back in 1980.

“The enemy’s concerns, pressures, and making excuses over our missiles with their pinpoint accuracy, stem from their knowledge of the fact that Iran is in possession of an independent missile power,” he added.

“Iran defines its defense policies within the framework of its national interests and independent from the interests of foreign and hegemonic powers,” he said.

Noting that peace and stability in the Persian Gulf and the Strait of Hormuz are tied to Iran’s national interests, the major general warned the country’s enemies to avoid making miscalculations about Iran’s power, otherwise, it would be “costly” for them.

He further maintained that US’ and Israeli regime’s anger at Iran stems from the fact that the Islamic Republic possesses both components of deterrence, namely a fully capable and prepared armed forces and a regional power.