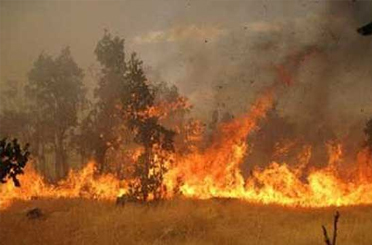 Tehran Times – Given that heavy rainfall saturated the country over the past few months, plant and vegetation cover has been expanded which seems to be vulnerable to temperature rise, so wildfire risk increases during this summer (starting on May 22), said Tehran’s department of environment deputy director for technical affairs.

Considering temperature increase during the summer, vegetation and plants will dry which enhances the possibility of massive fires, while the direct and indirect involvement of humans is not negligible, Mehr quoted Mehrdad Katal-Mohseni as saying on Wednesday.

Most of the times, people camping in the nature leave a fire unattended or do not monitor the fire to fully extinguish, so winds blow hot combustibles around, which act as the heat source for nearby brush and vegetation, he lamented, adding that sometimes litter and waste left in the nature can contribute to the wildfires.

To prevent the probable losses, we held some meetings and discussed ways to extinguish the fires instantly using the available equipment and facilities, he highlighted, noting, requirements and shortages also have been assessed and announced to responsible bodies in order to provide us the necessary facilities.

He further called on the people and environment enthusiasts who camp in nature to take safety precautions and manage the fire responsibly as well as not leaving the waste in the environment.

If a fire has gotten out of control, please call the emergency services immediately on 1540, he concluded.

Qasem Sabz’ali, commander of the forest protection unit of the Forests, Range, and Watershed Management Organization, said in April 2018 that some 15,000 hectares of forests burn in wildfires annually in Iran that 95 percent of them are caused by humans, ISNA reported.

Forest wildfire brings heavy economic burden amounting to 560 million rials (about $13,000) per hectare for the country, he added.