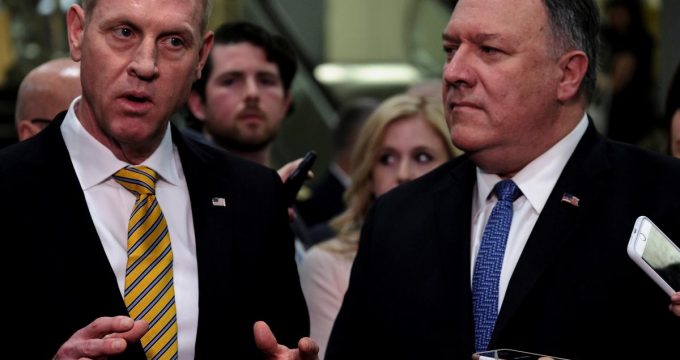 Bloomberg  | Daniel Flatley and Steven T. Dennis: Democrats were still clamoring for answers about U.S. intentions in Iran, even after a closed-door briefing from Trump administration officials about heightened tensions in the region.

Secretary of State Michael Pompeo, Acting Defense Secretary Patrick Shanahan and other intelligence officials spoke with House Republicans and Democrats at the Capitol Tuesday, followed by a separate briefing for senators. Democrats leaving the briefings characterized them as too-little-too-late and contended that any military action in Iran would require explicit congressional approval.

“The Iranians are nowhere near being ready to talk. They are not showing any signs of backing down from their provocatory behavior,” said Senator Chris Murphy, a Connecticut Democrat. “So, tell me how this strategy is working if Iran won’t talk and they’re not de-escalating militarily?”

The private sessions came at the request of lawmakers seeking more information on recent U.S. movement in the region, including a carrier strike group deployment and the withdrawal of some diplomatic staff from the Baghdad embassy. Shanahan characterized the U.S. strategy as defensive and promised to be more responsive to concerns from Congress.

“Our biggest focus at this point is to prevent Iranian miscalculation,” Shanahan told reporters after the briefing. “We do not want the situation to escalate. This is about deterrence, it’s not about war.”

Republican Senator Lindsey Graham, who generally supports Trump but had previously complained lawmakers weren’t being briefed adequately on Iran, said that General Joseph Dunford, chairman of the Joint Chiefs of Staff, has “done a very good job communicating directly and indirectly to the Iranians of the price they will pay” if they attack U.S. forces.

Democrats said the White House’s hesitation to share information with Congress, which has the constitutional authority to declare war, casts doubt on U.S. intentions in an unstable region that continues to be one of the world’s most complex geopolitical challenges.

Representative Ruben Gallego, an Arizona Democrat and a Marine Corps veteran who fought in Iraq, said he was alarmed that White House officials including National Security Advisor John Bolton appear to be pushing for military action in Iran, even if President Donald Trump would prefer to keep his campaign pledge to avoid costly foreign conflicts. Gallego compared current tensions to the run-up to U.S. military action in Iraq in 2003.

“I truly believe that the intel is being misinterpreted and misrepresented by Secretary Pompeo, by Bolton and other people that do want us to go to war in Iran as a repeat to Iraq,” Gallego said as he left the briefing.

House Foreign Affairs Chairman Eliot Engel said there’s widespread concern among Democrats that the administration is rushing into an armed conflict. He said there was nothing new in the intelligence briefing, and said he was concerned about how long it took for Trump administration officials to explain their actions to lawmakers.

Texas Representative Michael McCaul, the top Republican on Engel’s committee, said it’s “premature” to talk about seeking congressional approval for military action because the U.S. response thus far has been to deter perceived aggression from Iran.

“It’s purely defensive,” McCaul said. “We’re obviously concerned about our military soldiers who are threatened by Iran and a potential attack on them in Iraq.”

Adam Kinzinger, a Republican from Illinois who served in the Air Force and sits on the Foreign Affairs panel, criticized Democrats who questioned the information provided by the Trump administration. He described the briefing as “solid,” and said, “if anybody’s questioning that somehow there’s made-up intelligence, that’s ludicrous.”

The fundamental concern from most lawmakers centered on the secrecy that surrounded subtle escalations from both the U.S. and Iran that could be misinterpreted as provocation. House Majority Leader Steny Hoyer said members want to know what changed “so significantly” on the ground in recent months to lead the administration to take the steps it did.

“Most of us do not believe that a war with Iran will end well or be productive endeavor for us,” Hoyer said earlier Tuesday. “We have great reticence. We want to hear today, what are the facts? What is leading the administration to believe that things have changed so significantly that they need to be talking and acting in a way that raises the possibility of war?”

Some of the frustration stemmed from Pompeo and the perception that he has been dismissive of lawmaker concerns.

“Secretary Pompeo basically said, ‘Eh, not a big deal,’ and I disagree with him on that,” Adam Smith, the Washington Democrat who leads the House Armed Services Committee, said after the briefing. Smith gave Shanahan higher marks for responding to Congress, saying he “personally reached out to me on a number of occasions and he said, ‘Yes, we need to do better.’”

Bob Menendez of New Jersey the top Democrat on the Senate Foreign Relations Committee, also described Pompeo as “combative” and said the Trump administration has undermined its foreign policy credibility by not explaining recent U.S. responses to developments in the Middle East.

Referring to the faulty intelligence that served as the justification for the Iraq invasion in 2003, Menendez said, “We don’t need another weapons of mass destruction moment. Testing the veracity of that intelligence and the actions taken are incredibly important.”

Senator Marco Rubio, a Florida Republican, said it was wrong to compare the two situations.

“This is very different,” Rubio said. “No one here is proposing sort of a unilateral U.S. offensive against Iran. It’s been very clear from the outset, and that is: If Iran attacks, there’s going to be a response. If they don’t attack, then there will ll be no war.”

Both Democrats and Republicans argued that the Trump administration would need approval from Congress to go to war.

“If we’re going to go to war, it ought to be debated and discussed and passed by Congress,” said Republican Senator Mike Lee.

Iran-US tensions, Mike Pompeo, US Democrats May 23, 2019
War with Iran could send oil prices to $250 per barrel
Leader: Youth can cause big change in management system