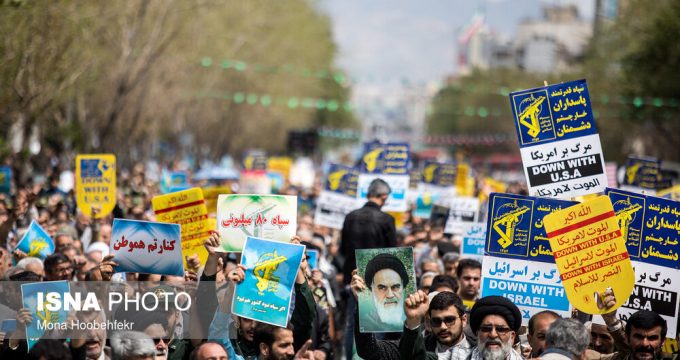 Iran stiffens its resolve as the Trump administration’s pressure mounts

The New York Times | Vivian Yee: In its campaign to throttle Iran into submission, the Trump administration has in the last several weeks applied smothering force — blocking the country’s last avenues for selling oil, classifying the elite Islamic Revolutionary Guards Corps as a terrorist organization and deploying ships and bombers to the Persian Gulf.

But if the goal of increased pressure was to force Iran to change its behavior or to send angry Iranians into the streets to ultimately sweep the nation’s clerical leadership from power, it has so far achieved neither.

Instead, it appears to have only stiffened Iran’s resolve, pushing it from wary patience to calibrated confrontation against an enemy it has long mistrusted. Its leaders, analysts say, are determined not to capitulate to what they view as economic and psychological warfare, or to negotiate under duress.

“Try respect,” Foreign Minister Mohammad Javad Zarif shot back at President Trump in a tweet on Monday. “It works!”

Administration officials defended their Iran strategy to Congress on Tuesday, laying out intelligence about Iranian threats that they said justified sending an aircraft carrier, bombers and missile defense systems to the Persian Gulf region this month.

In the short term, at least, the administration’s pressure tactics are leaving bite marks. With inflation running high and medicine, food and other basics running short, Iran’s economy is tanking under the combined force of the sanctions and Iranian mismanagement, heightening public frustration.

But for Iranians, it is hard to view the American chokehold as anything but bullying from a historic foe that promised sanctions relief and a path back into the international community in exchange for limits on Iran’s nuclear capabilities, only for the United States to go back on its word.

After months of quietly upholding its end of the 2015 nuclear bargain it struck with the United States and other world powers, Iran has begun to jettison parts of the agreement. It announced last week that it would resume the production of nuclear centrifuges and begin accumulating nuclear material.

Iran, its proxies or other allied groups are suspected of carrying out two recent attacks on Saudi oil tankers and pumping stations in the Persian Gulf and a rocket attack near the American Embassy in Baghdad.

There is no hard evidence linking Iran to the attacks, which caused no casualties and only minor damage but may have been intended to send a message.

“They believe they’re under attack, and their response is not to escalate to a conflict, but certainly not to back down,” said Ariane Tabatabai, a political scientist at the RAND Corporation and an Iran researcher at Columbia University. “What they want to do is continue this current trend of doing everything they can to poke the U.S. in the eye, without getting to the threshold of an all-out war.”

Targeting a crucial oil shipping route would serve as a pointed reminder that Iran is capable of striking American allies and disrupting the world’s economy, even if it cannot fight the United States military head to head.

Calibrated provocations also give Iran’s leaders a means of showing the public that they are standing up to the United States, Ms. Tabatabai said.

Both sides appeared to swerve away from conflict last week when both Mr. Trump and Ayatollah Khamenei made statements saying they did not want a war. But just as tensions seemed to simmer down, Mr. Trump tweeted Monday that, “If Iran wants to fight, that will be the official end of Iran. Never threaten the United States again!”

What provoked the outburst was unclear, but Mr. Zarif, the foreign minister, responded with a hashtag: #NeverThreatenAnIranian. Iranian officials have repeatedly warned that Iran will retaliate if attacked.

The following day, Mr. Trump again raised the prospect of talks, but put the onus on Iran to reach out. “Iran will call us if and when they are ever ready,” he tweeted.

But for Iran, negotiations can only happen if the “sanctions, insulting and bullying” stop, said Diako Hosseini, an analyst at Tehran’s Center for Strategic Studies, which is affiliated with Iran’s presidential office. “Otherwise it is impossible that Iran surrender.”

“It was the U.S. that pulled back from the negotiation table, not Iran,” he added. “Iranians don’t believe in Trump’s sincerity.”

Iranian leaders who supported dialogue, like President Hassan Rouhani, have been sidelined by Mr. Trump’s withdrawal from the nuclear deal. On Wednesday, Ayatollah Khamenei openly criticized Mr. Rouhani and Mr. Zarif, saying that he “warned them several times” that he “did not really believe in” the way they handled the nuclear agreement, the official IRNA news agency reported.

Ayatollah Khamenei has compared negotiating with the United States to “drinking poison.”

“The parts of the government that wanted to engage with America have been proven wrong, and are not going to have an opportunity to engage anytime soon,” said Narges Bajoghli, an assistant professor at the Johns Hopkins School of Advanced International Studies who frequently speaks with people in hard-line Iranian circles.

Iranian officials have tried to drive a wedge between President Trump, who has frequently expressed the desire to disentangle the United States from the Middle East, and his foreign policy team, which takes a harder line. National Security Adviser John Bolton has long advocated regime change, while Secretary of State Mike Pompeo has also appeared to endorse it.

Iranian leaders have singled out Mr. Bolton as a warmonger who is getting ahead of his boss.

“Bolton May Be Sacked,” read a recent headline in Javan, a hard-line newspaper, referring to American reports that Mr. Trump was not pleased with Mr. Bolton. “Infighting in Washington,” echoed Arman-e Emrooz, a more moderate paper.

Analysts said the Iranians may have been hoping to lay low until the 2020 American presidential election when a friendlier administration might come to power. They were thinking, “maybe we can wait this guy out,” said Dina Esfandiary, a Century Foundation fellow who focuses on Iran. Most of the Democratic presidential candidates support rejoining the nuclear deal.

But there are no guarantees that a Democrat will win, or that a new president would automatically embrace the deal without new demands.

While Iranian officials may be able to rely on rainy-day funds, oil smuggling and trade with friendly countries until the end of 2020, they are not likely to carry it through 2024, analysts said.

Donald Trump, Iran-US tensions, US decision to blacklist IRGC, US sanctions against Iran May 23, 2019
The last thing Trump wants is a war with Iran
Iran closes border crossing with Iraq citing ‘backlog’ of export goods