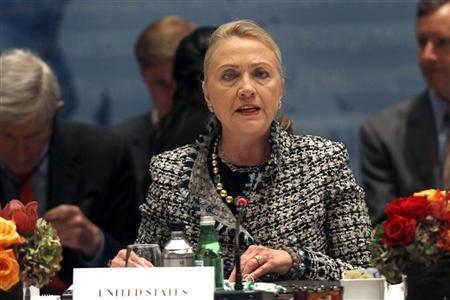 Hillary Clinton suggests US talks with Iran amid fears of war

Sputnik – The Former Secretary of State takes credit for curbing the Iranian nuclear program and says the US should continue its diplomatic efforts instead of escalating tensions in the region.

Former US State Secretary and former Democratic Presidential Candidate Hillary Clinton suggested Monday that the US should engage in more diplomacy with Iran instead of threats of force, which US President Donald Trump likes to resort to, Fox News reported Tuesday.

Tauscher served in the US State Department as the Under Secretary of State for Arms Control and International Security Affairs until 2012, when she became the Department’s Special Envoy for Strategic Stability and Missile Defence for less than a year. She was the key negotiator in the New START treaty, which imposes bilateral limits on the number of deployed nuclear warheads, strategic bombers and missile launchers, signed between the US and Russia in 2010.

“That is what we did with the Iran negotiations — put a lid on Iran’s nuclear program,” Clinton said in an apparent reference to her diplomatic efforts during the Obama administration. “That is what we should still be doing.”

While Clinton’s speech did not mention Trump in person, the 45th US president repeatedly threatened Tehran with an escalation of force, promising “the official end of Iran” in case of military conflict. Recent reports suggest the US is building up its military presence in Iraq, despite Trump saying he’s not looking for a war with the Islamic Republic.
“If Iran wants to fight, that will be the official end of Iran. Never threaten the United States again!” he tweeted on Sunday.

On Monday, the Tasnim News Agency reported Iran’s decision to quadruple its uranium enrichment production but noted that it will remain below the margin set by the Iranian Deal.

Back in 2018, Clinton criticized Trump’s decision to unilaterally withdraw from the Iranian Nuclear Deal, warning that such a step will be a blow to US credibility on the international stage.

“As Secretary of State, I helped negotiate the crippling international sanctions that brought Iran to the table. It would be much harder a second time, now that our credibility is shot,” she tweeted in May 2018.

As Secretary of State, I helped negotiate the crippling international sanctions that brought Iran to the table. It would be much harder a second time, now that our credibility is shot.

Despite unilateral withdrawal by the US, Iran continues to adhere to the multilateral deal, signed by the US, EU, UK, France, Germany, Russia and China. All parties (except the US) pledged their intention to uphold the deal as well.

Hillary Clinton was the Democratic nominee during 2016 presidential race but lost after Trump’s poll-defying victory. The former First Lady, Senator and Secretary of State, Clinton has remained mostly below the political radar since. She announced she will not run for president in the 2020 race.