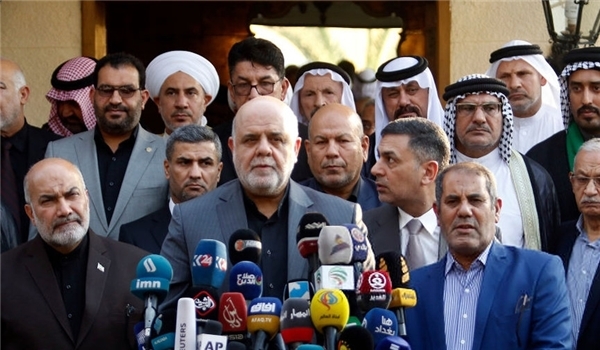 Iranian envoy to Iraq warns US of any stupid move

FNA – Iranian Ambassador to Iraq Iraj Masjedi warned that any stupid measure by Washington will have disastrous consequences for them.

“Any stupid measure by the US will undoubtedly bring regret and failure for them,” Masjedi said in a meeting with Head of the Sunni Endowment Diwan in Iraq Abdul Latif al-Hamim in Baghdad on Saturday.

He added that the Islamic countries enjoy all power components against the world arrogance, and unity among the Muslim nations should be emphasized to materialize this power.

Al-Hamim, for his part, described the US sanctions against Iran as inhumane and cruel, warning that the recent US moves threatens all regional states, including its allies.

“The Iraqi people will stand beside the Islamic Republic of Iran against threats,” he underlined.

In relevant remarks last Thursday, Baghdad’s ambassador to Moscow stated that Iraq did not want a “devastating” new war in the Middle East and will not allow the US to use its territory for military action against neighboring Iran.

“Iraq is a sovereign nation. We will not let [the US] to use our territory,” Haidar Mansour Hadi, the Iraqi envoy to Russia, told journalists at a press conference in Moscow when asked about Iraq’s stance on the rising tensions in the region, fueled by the feud between Washington and Tehran.

The ambassador expressed his hope that “nothing will happen” eventually, adding that his nation “does not want a new devastating war in the region”.

The Iraqi envoy also said that Baghdad could try to use its close ties with both the US and Iran to ease tensions.

“Iraq made it clear that we want to be part of a solution and not part of the problem,” he stressed.

Also on Thursday, Asa’eb al-Haq Movement affiliated to the Iraqi popular forces of Hashd al-Shaabi reiterated its support for Iran and the necessity for the American forces to leave Iraq.

Senior member of the politburo of Asa’eb al-Haq Laith al-Ozari underscored the Movement’s support for Iran against the US in return for Tehran’s assistance to the Iraqi nation in war against the terrorist groups.

He also voiced opposition to the deployment of foreign forces in Iraq as “occupation”, cautioning that all citizens are entitled to the right to fight these foreign occupiers.

Al-Ozari said that the political fractions in Iraq would not allow their country’s territory be used as a platform for attacks on the neighboring states.