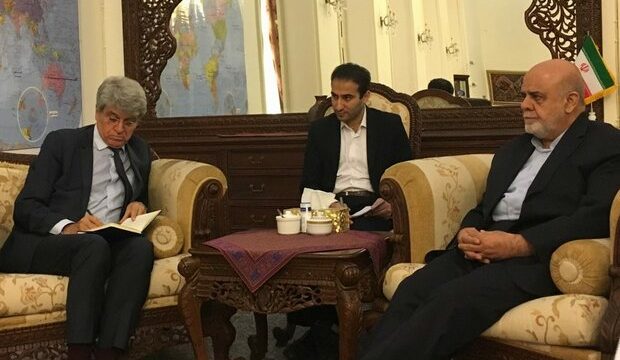 MNA – The Iranian and French ambassadors to Iraq met in Baghdad on Sunday to discuss regional developments.

During the meeting held in the Iranian Embassy, Iran’s Ambassador Iraj Masjedi and France’s ambassador Bruno Aubert reviewed a host of issues, including the recent developments in the region and the tensions created by the US’ provocative acts against regional countries, including Iran and Iraq.

Withdrawing from the nuclear deal (Joint Comprehensive Plan of Action) in May 2018, re-imposing tough sanctions which were lifted after the deal, designating Iran’s Islamic Revolutionary Guards Corps as a foreign terrorist organization and deploying naval fleet and bombers in the Middle East are among tension-building measures of the United States.

The two sides stressed the need to adopt a positive dialogue to reduce tensions in the region and establish stability.

Earlier in the day, Masjedi met with Iraqi President Barham Salih in Iraq’s presidency office, where the two discussed similar issues on latest political developments in the region.

The Iranian and Iraqi officials also conferred on ways to promote bilateral cooperation in different fields.