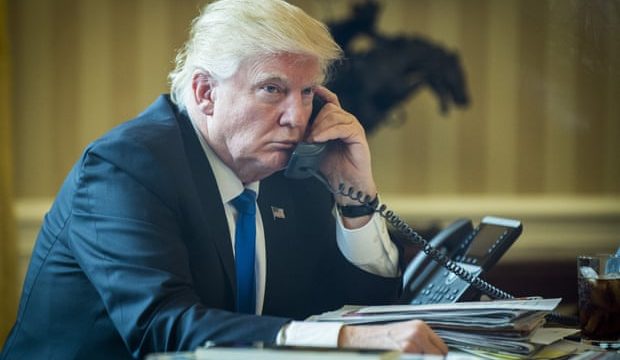 US ‘sitting by the phone’ awaiting call from Iran: Official

Press TV – A senior Trump administration official says the US is “sitting by the phone” to hear from Iran, but it has yet to receive any message suggesting Tehran is willing to accept Donald Trump’s overtures for direct talks.

The US has heard no message yet from Iran, but “we’re sitting by the phone,” the senior official, who declined to be identified, told a small group of reporters on Friday.

Back on May 9, Trump publicly appealed to Iran to call him amid heightened tensions.

On the same day, CNN reported that the White House has contacted Swiss authorities to share a telephone number with Iran in hopes that Tehran will contact Trump.

The call for talks came four days after John Bolton, the hawkish US national security advisor, declared the US was sending an aircraft carrier strike group and a bomber task force to the Middle East in a “clear and unmistakable” message to Iran.

The move, he said, is aimed at sending a “clear and unmistakable message” to Iran that “any attack on United States interests or on those of our allies will be met with unrelenting force.”

Bolton said the decision was “in response to a number of troubling and escalatory indications and warnings.”

Trump, however, later ordered his administration to avoid a military confrontation with Iran, The New York Times and Reuters reported Friday.

During a Wednesday morning meeting in the Situation Room, Trump sent a message to his hawkish aides that he does not want the US pressure campaign against Iran to explode into an open conflict.

“Trump was firm in saying he did not want a military clash with the Iranians,” read the paper citing five senior officials who described the administration’s internal debate over Iran.

The report cited anonymous officials informed on the matter as saying that Trump had privately expressed concern that some of his advisers, such as John Bolton, were pushing for war.

awks in Trump’s team have reportedly gone as far as drawing up plans for a possible military strike that could involve sending 120,000 soldiers to the Middle East.

The New York Times on Monday claimed Acting Defense Secretary Patrick Shanahan had presented an updated military plan that envisioned sending as many as 120,000 troops to the Middle East should Iran attack American forces or accelerate work on nuclear weapons.

The New York Times’ claim was later on Tuesday denied by Trump, who described it as “fake news” and said, “Hopefully we’re not going to have to plan for that. And if we did that, we’d send a hell of a lot more troops than that.”

Later on Friday, Trump tweeted that “the Fake News Media is hurting our Country with its fraudulent and highly inaccurate coverage of Iran.”

“It is scattershot, poorly sourced (made up), and DANGEROUS. At least Iran doesn’t know what to think, which at this point may very well be a good thing!” he added.

Iranian Foreign Minister Mohammad Javad Zarif immediately replied, “With the #B_Team doing one thing & @realDonaldTrump saying another thing, it is apparently the US that ‘doesn’t know what to think.’”

“We in Iran have actually known what to think for millennia—and about the US, since 1953. At this point, that is certainly ‘a good thing!’” the top Iranian diplomat added.

Zarif’s response apparently made the US president soften his tone to some extent, as he later suggested that fake news are confusing Iran too.

The Iranian foreign minister has yet to continue this Twitter war of words, but Iran’s Minister of Information and Communications Technology Mohammad Javad Azari Jahromi said that Trump’s “mad advisors” are the source of fake news.