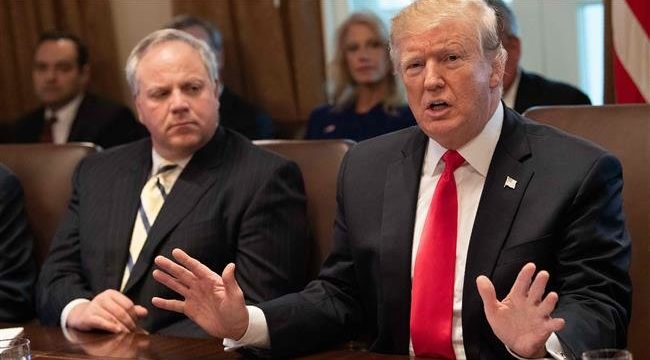 Foreign Policy – Amid a tense standoff between the United States and Iran, four lawmakers are sending a letter to U.S. President Donald Trump expressing concern that he was “inflating threats and bending intelligence” on Iran and leading the United States down a “path to another war in the Middle East”—though top administration officials said they do not seek a war with Iran.

The letter, from Democratic Sens. Chris Van Hollen, Ed Markey, and Jeff Merkley as well as Independent Sen. Bernie Sanders, and obtained by Foreign Policy, highlights the growing concern on Capitol Hill that the Trump administration might stumble into an armed confrontation with Iran. It also underscores how rattled Democrats are by the administration’s overall Iran strategy, even as they acknowledge the veracity of the current threat that flared up earlier this month. Last week, two other Democratic senators, Dick Durbin and Tom Udall, published an op-ed in the Washington Post that delivered similar warnings.

“The threat is real,” Sen. Mark Warner, the top Democrat on the Senate Intelligence Committee, said on Wednesday, according to the Associated Press. But he added the Trump administration “is doing a dreadful job of consulting with Congress and keeping the vast majority of members of Congress informed about what’s happening.”

That may change, as two congressional aides tell Foreign Policy that top Trump administration officials, including Secretary of State Mike Pompeo and acting Defense Secretary Patrick Shanahan, will brief the full Senate on the threats on May 21.

In the letter, Van Hollen, Markey, Merkley, and Sanders argue the Trump administration’s Iran strategy is “increasingly inconsistent and counterproductive” and express concern its assessments of threats from Iran “fit into a larger pattern of inflating threats and bending intelligence to justify dangerous, predetermined policies.”

They asked Trump to respond to their letter by June 15 with more clarification on his Iran strategy, including how sanctioning nonproliferation projects being monitored by the United Nations’ International Atomic Energy Agency (IAEA) fulfill the administration’s objectives, what the administration’s plan is to “constrain Iran’s nuclear program if the limits under the [Iran deal] are terminated,” and what progress the administration has made on the new Iran strategy that it rolled out in 2018.

Writing on Twitter, Trump on Wednesday dismissed as “fake news” reports he is frustrated with his top aides on Iran, including National Security Advisor John Bolton, for carrying forward warlike plans. “I’m sure that Iran will want to talk soon,” he said.

Iranian Foreign Minister Mohammad Javad Zarif, on a visit to Japan on Thursday, said, “there is no possibility for negotiations” with the United States to quell the tensions. In response to Trump’s military moves, Iran also announced last week that it would begin a partial withdrawal from the 2015 multiparty nuclear deal, which it has observed until now and which Trump withdrew the United States from a year ago.

But the administration still appears to be looking for diplomatic openings, as hinted at by Trump’s visit with the president of the Swiss government, Ueli Maurer, at the White House on Thursday and a call on Wednesday between Pompeo and Omani Sultan Qaboos bin Said.

The four senators say the administration’s threat assessments on Iran’s nuclear ambitions are “inconsistent,” based on two examples. In January, Director of National Intelligence Dan Coats said in a congressional hearing, “we do not believe Iran is currently undertaking the key nuclear weapons-development activities we judge necessary to produce a nuclear device.” In February, the IAEA backed up Coats’s assertion and verified that Iran was not diverting declared nuclear material to its weapons program.

“Your administration, however, is making assertions that are at odds with these findings,” the letter reads, citing Pompeo’s casting of Iran as engaging in “nuclear blackmail” and a new State Department report on international arms control compliance that hinted Iran was not in compliance with obligations on nonproliferation.

U.S. officials privately raised alarm bells over the State Department report, according to Reuters, when a senior Trump appointee in the State Department pushed to include opinion pieces and select news stories in the Iran section of the report, which normally only includes information from U.S. intelligence and legal analysis. That official, Assistant Secretary of State Yleem Poblete, is departing her job in the coming weeks following disagreements with other senior officials, the Washington Post reports.

The latest flare-up in tensions started earlier this month, when the Trump administration highlighted an unspecified threat from Iran that endangered the lives of U.S. forces in the region. The administration has yet to specify what the threat is publicly, but Saudi Arabia accused Iran of planning terrorist attacks against its oil pipelines after four commercial ships were damaged in attacks off the United Arab Emirates. Publicly available details on the attacks remain scarce. The New York Times reported that photographs of Iranian forces putting missiles on small boats that could be used to target U.S. vessels prompted the initial alarm.

The administration’s grave warnings were initially met with some skepticism and exasperation in Europe, where Trump has alienated allies with his hard-line stance on Iran by tightening sanctions on the country after withdrawing the United States from the 2015 Iran nuclear deal.

Since the administration flagged the new threat, the State Department ordered all nonemergency personnel withdrawn from the U.S. Embassy and consulate in Iraq and put other embassies in the region on alert. The United Kingdom also raised the threat level for British troops in the Middle East on Thursday, and the Dutch and German governments temporarily suspended their training missions in Iraq—though the German government stressed it faces “no concrete threat” at the moment.

When asked by a reporter outside the White House on Thursday whether the United States was going to war with Iran, Trump replied, “I hope not.”