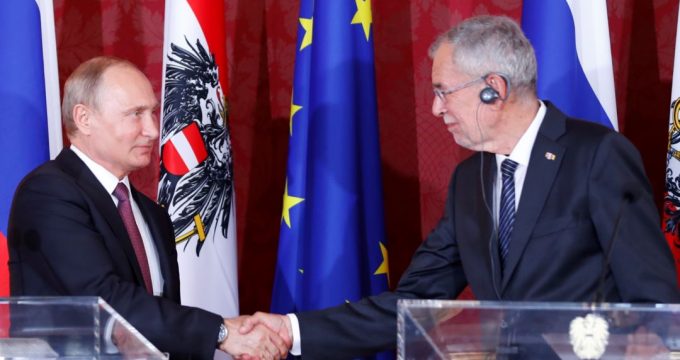 Press TV – Russian President Vladimir Putin says Iran’s nuclear program is most transparent and Moscow “regrets” to see the 2015 nuclear agreement unravel since America’s decision to leave it in May 2018.

Speaking to reporters after talks with Austrian President Alexander van der Bellen on Wednesday, Putin aired his frustration with expectations from Moscow to save the landmark agreement, saying Russia was not “a fire brigade” to “rescue everything.”

“We regret that the deal is falling apart,” Putin said.

“After the signing of the agreement Iran was and still is the world’s most verifiable and transparent country in this sense.” “Iran is fulfilling all of its obligations,” said Putin, citing the International Atomic Energy Agency.

Tensions have sharply escalated between Washington and Tehran after Trump withdrew from the Iran nuclear deal which removed sanctions in exchange for curbs on Iran’s nuclear program, leaving the fate of the deal at the hands of the remaining signatories — the UK, France, China, Russia and Germany.

Trump’s pressure on Iran to renegotiate a deal that would address its ballistic missile program and growing regional influence continued with the imposition of several rounds of sanctions and reached a point where American officials threatened to cut the country’s oil exports to zero.

Running out of patience with the EU’s inaction in the face of the growing US pressure, Iran reduced its commitments under the deal last week and warned the EU that it would consider leaving the accord after 60 days if its demands were not met.

‘Russia not a fire brigade’

Putin on Wednesday urged Iran not to quit the agreement but added there was only so much his country could do to keep the deal intact.

“Russia is not a fire brigade,” Putin said.

“We cannot rescue everything that does not fully depend on us. We’ve played our part,” adding that Europe could do “nothing” to salvage the deal without the US.

Earlier in the day, Kremlin spokesman Dmitry Peskov expressed concern over rising tensions between Iran and Washington despite assurances from US Secretary of State Pompeo that the Trump administration was not seeking war.

“So far we notice the continued escalation of tensions around this subject,” Peskov said.

“We are saddened to see the decisions taken by the Iranian side,” Peskov added, while accusing Washington of provoking Iran.

Pompeo met Putin in the Black Sea resort of Sochi on Tuesday and assured the Russian head of state that country did not want war with Iran even though the Pentagon has recently dispatched an aircraft carrier and a number of B-52 nuclear-capable bombers to the Middle East.

“There were no assurances from Pompeo,” Peskov said. “And one can hardly talk about some sort of assurances.”

On Sunday, talk of war was pushed up another notch after unknown assailants targeted four vessels, including two tankers from Saudi Arabia,  off the United Arab emirates in mysterious acts of “sabotage.”

Washington has since accused Tehran of planning “imminent” attacks in the region. On Wednesday, the US ordered all non-emergency staff to leave its embassy in the Iraqi capital Baghdad and consulate in Erbil.

Iran, however, has dismissed the US accusations and advised Persian Gulf neighbors to stay vigilant amid plots by “foreign players” and “ill-wishers” to cause tension in the region.

Leader of Islamic Revolution Ayatollah Seyyed Ali Khamenei ruled out the possibility of war on Tuesday, asserting Washington knows engaging in such a conflict would not be in its interest.

“The Iranian nation’s definite option will be resistance in the face of the US, and in this confrontation, the US would be forced into a retreat,” Ayatollah Khamenei said. “Neither we nor they, who know war will not be in their interest, are after war.”

Ayatollah Khamenei further explained that the confrontation between the two sides is “a clash of wills,” asserting that Iran would be the ultimate victor of this battle.