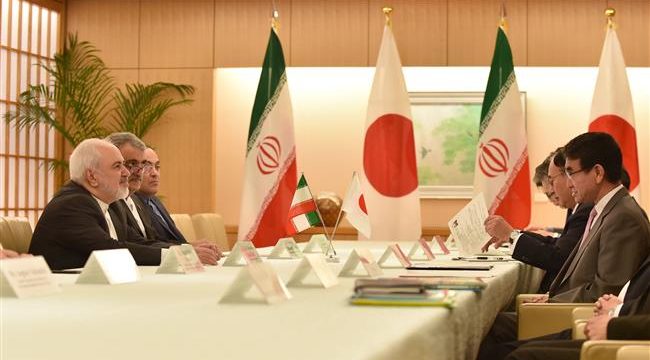 Press TV – In a visit to Japan, Foreign Minister Mohammad Javad Zarif says Tehran is showing “maximum restraint” in the face of the United States’ unilateral exit from the 2015 nuclear deal and the “unacceptable” re-imposition of sanctions against the Iranian nation.

Speaking at the start of a meeting with his Japanese counterpart, Taro Kono, in Tokyo on Thursday, Zarif stressed that the Islamic Republic is exercising “maximum restraint in spite of the fact the United States withdrew from (the) JCPOA last May,” referring to the nuclear accord by the acronym of its official name, the Joint Comprehensive Plan of Action.

The top diplomat also noted that Iran is still committed to its obligations under the JCPOA and that continued assessments proved this fact.

“We believe that escalation by the United States is unacceptable and uncalled for,” Zarif added.

Under the administration of President Donald Trump, the US has taken an increasingly hostile approach toward Iran.

Washington pulled out of the JCPOA on May 8, 2018, and re-imposed the anti-Iran sanctions it had lifted under the nuclear deal as part of a campaign of “maximum pressure” against the Islamic Republic.

Recently, it moved to force Iran’s oil exports to “zero” and sent military reinforcements, including a strike group, B-52 bombers and Patriot missiles, to the Middle East in a bid to step up pressure on Tehran.

Kono, for his part, voiced serious concerns about the situation in the Middle East.

“I will spare no effort to ease tensions and try to resolve outstanding issues,” he added.

The top Japanese diplomat further said that it was essential to maintain the JCPOA, demanding that Iran keep implementing it.

After the private meeting, Zarif said that he had explained to his Japanese counterpart ways to ease regional tensions and stop America’s warmongering. He also reaffirmed that Iran is not seeking a conflict, but strongly defends its interests.

He also noted that Kono had expressed Japan’s commitment to the JCPOA and its keenness to adopt diplomatic measures meant to reduce tensions in the region.

If the international community wants to preserve the JCPOA, it should take steps to normalize economic ties with Iran as stipulated in the agreement, Zarif added.

On the first anniversary of Washington’s exit from the JCPOA, Iranian President Hassan Rouhani announced that the country would stop exporting excess uranium and heavy water for a 60-day period, during which the remaining signatories would have to honor their promises and ensure that Iran is no more deprived of the economic benefits it was promised under the accord.

Tehran said the measures are not in violation of the JCPOA and are meant to restore the balance between its rights and obligations under the deal.

At the meeting, Abe expressed Tokyo’s willingness to maintain and develop its traditionally friendly ties with Tehran.

“I’m concerned that the situation in the Middle East is becoming very tense,” the Japanese premier said.