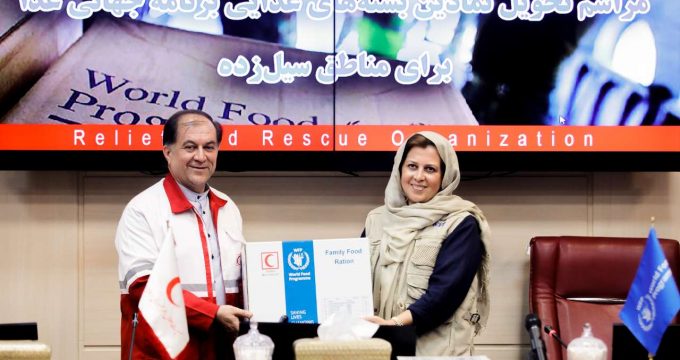 The packages will be distributed among 50,000 flood victims residing in the cities of Hamidieh and Dasht-e-Azadegan.

The packages were delivered to IRCS, with WFP Representative and Country Director in Iran, Negar Gerami, and head of Rescue and Relief Organization, Morteza Salimi, in attendance on Sunday in Tehran.

In an exclusive interview with the Tehran Times published on May 4, Gerami commented on WFP assistance to the flood-hit Iranians explaining that “They UN very quickly stepped in and offered its condolences and assistance. We were part of an assessment team that went to the field on April 10. Three assessment teams were sent into the fields in Lorestan, Golestan and Ilam provinces which were among the most affected. Speaking with the people and authorities and seeing for ourselves the extent and level of damage, each UN agency, given its mandate, developed a project, for assistance.”

“Here in WFP we mobilized from our own immediate response account for the purchase of food parcels to be delivered through the Iranian Red Crescent Society to the people in need,” she added.

“The food parcels will go to Khuzestan province because it was announced as one of the most hard-hit and most in need. There is about 30 kilogram in each parcel of mixed commodities. It will be enough to feed about 40,000 people for one month. It’s very important that this happens now because of the month of Ramadan and it’s very important for the people to have nourishing and nutrient commodities in their food basket,” she highlighted.

WFP is the world’s largest humanitarian agency fighting hunger worldwide, delivering food assistance in emergencies and working with communities to improve nutrition and build resilience. Each year, WFP assists some 80 million people in around 80 countries.