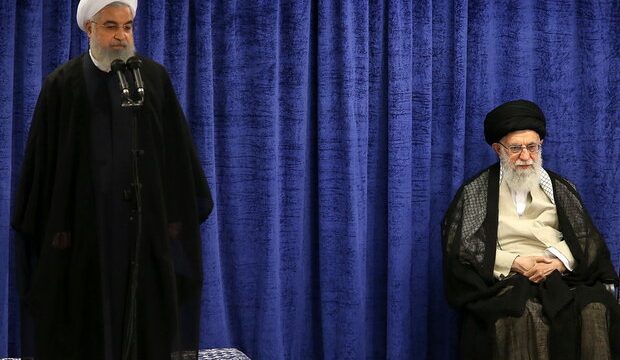 MNA –The Iranian president Hassan Rouhani referred to the United States’ decision to stop Iran’s oil exports and disrupting non-oil exports, as well as psychological pressure, saying, “We will undoubtedly pass this stage with people’s resistance and steadfastness, and better management and planning”.

Speaking on Tuesday evening at the meeting of authorities with Supreme Leader, President Hassan Rouhani said, “The Iranian calendar year of 1397 was a hard year for the people of our country, especially with regard to their living”.

He also referred to the opening of great projects in the recent years, including Phase 15 of South Pars Gas Field, he said, “During this time, the greatest gas condensates refinery, which is unique in the Middle East, was opened, which doubled our petrol production, leading to self-sufficiency in petrol production”.

The President went on to mention the opening of the greatest road and railway projects, including the connection of four provinces to the nationwide railway system, as well as the spike in the production of agriculture products, saying, “In addition to the increase of guaranteed purchase of wheat, we have achieved self-sufficiency in wheat production and increase in the production of cooking oil plants”.

He also referred to the three- to five-fold increase in payments to those under the cover of Imam Khomeini Relief Foundation and the Welfare Organization, and described the construction work in the 14 months after the Kermanshah Earthquake a great job.

Stressing that unity and solidarity are important in the country, Rouhani added, “What the people and authorities did after the floods was extraordinary, and we need a unity like that today to turn a treat into an opportunity”.

People are under pressure to make a living, said Rouhani, adding, “If we can exercise more monitoring on imported goods, we can reduce people’s problems and overcome the sanctions”.

Describing observation and belief in the Constitution as the yardstick of friendship in the country, he said, “If everyone acts based on the Constitution, using all its potentials, we can overcome the problems”.

He said that managing the country is not possible without reforming the budget and economy structure, saying, “This is not just under the authority of the government. Authorities need to converge and the understanding of the parliament and the government about the country, region and world need to be the same”.

“We can replace oil incomes with non-oil ones,” added Rouhani, continuing, “With their miscalculations, the Americans thought that they could bring the great Iranian nation to their knees, and they designated dates for this, but the people of Iran stood powerfully with steadfastness”.

Stating that the people, the Supreme Leader, the government and Iran’s Parliament defeated the enemies, he said, “Today, the enemies are working hard, sending their fleet in the morning, and giving phone number in the evening. Of course, we have many phone numbers of them; any date at which they have carried out a crime against the Iranian nation is their real phone numbers”.

“The argument between us is because of tyranny and aggression towards the peoples and the Iranian nation. Repent and get back on the right track, the door is open, may the people of Iran forgive your historic tyranny and crimes,” said the President.

He continued, “After the violation of the nuclear deal by the US, we gave enough time to our friends and the European Union to live up to their commitments”.

Saying that today we should use the legal path, and this has begun by the government, the Supreme National Security Council, and Supreme Leader’s guidance, the president said, “This is a path that we have announced and acted upon”.

He added, “Some mistakenly say that we have given 60 days to them to take action, while we have started on May 8, abandoning two obligations, and will put two other obligations after 60 days”.

Rouhani said, “Today, we are taking a great divine test, and will undoubtedly pass through this stage with resistance and steadfastness,” emphasizing that with people’s support, tolerance and resistance we can achieve victory.

Hassan Rouhani, Iran oil exports, Islamic resistance, US sanctions against Iran May 15, 2019
‘We fundamentally do not seek a war with Iran,’ says US state secy
Majlis to examine 7th report on JCPOA process