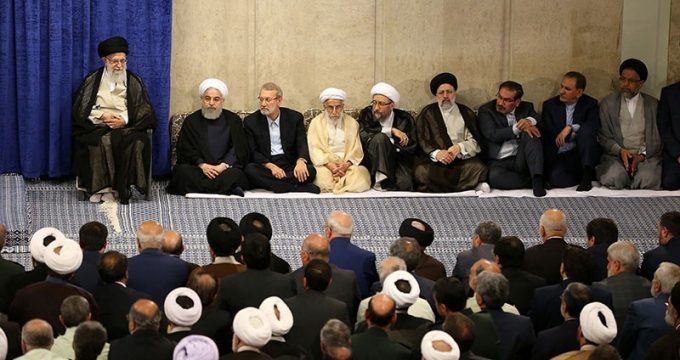 MNA – Explaining the reasons behind Iran’s refusal to negotiate with the US, the Leader of the Islamic Revolution Ayatollah Khamenei said Tue. that there will not be a war, stressing that resistance is Iran’s only choice.

The Leader of the Islamic Revolution Ayatollah Khamenei made the remarks on Tuesday in a meeting with the heads of power branches, officials and government authorities as well as a group of senior managers of various sectors, members of parliament, political, social and cultural activists on the eighth day of the auspicious month of Ramadan.

He said that there will not be a military confrontation as neither Iran nor the US seeks war because the Americans know that the war will not be beneficial for them.

The Leader said that the US seeks to take Iran’s strengths away, totally dismissing talks on Iran’s strengths, including the missile power and regional influence, as ‘foolish.’

He further stressed that no wise Iranian official agrees to hold talks over Iran’s strengths, adding that negotiating with current US government is ‘toxic’.

The leader added that the conflict is over ‘wills’ and Iran’s will is stronger.

Ayatollah Khamenei asserted that when the Americans want Iran to change its behavior, in fact they are ranting and raving.

The leader said that as a result of the US threats hatred towards the US among the Iranians has increased by more than ten times, adding that Iranian military forces are more prepared and vigilant than ever.