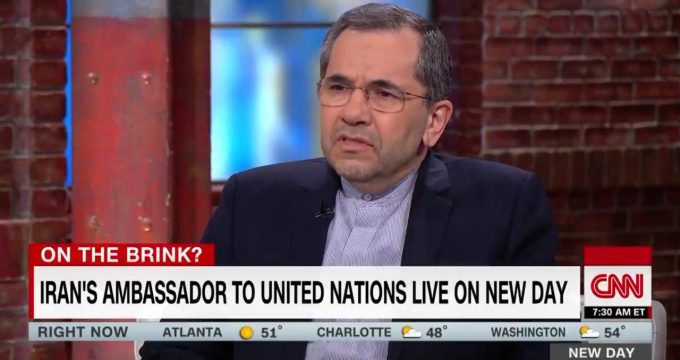 Iran’s UN ambassador: Nuclear weapons are ‘Against Our Religion’

CNS News | Susan Jones: Iran’s Ambassador to the United Nations Majid Takht Ravanchi on Tuesday denied any direct or indirect involvement in the sabotage of four tankers near the Persian Gulf; he denied that Iran has plans to attack U.S. interests or U.S. troops in the region; and he defended Iran’s decision to increase stockpiles of heavy water and enriched uranium, one year after the U.S. pulled out of the JCPOA nuclear deal.

“No. Because it is against our religion,” the ambassador replied. “Our supreme leader has made a verdict on the prohibition of nuclear weapons. Besides, nuclear weapons are not within the defense structure of Iran.”

President Trump has expressed a willingness to negotiate with Iran, even though he’s boosted economic sanctions on the Islamic state in an effort to change Iran’s aggressive conduct. Berman asked the ambassador if Iranian leaders would be willing to speak to Trump.

Last week, the Trump administration sent an aircraft carrier group and a bomber task force to the Middle East in a message to Iran and its proxies.

“In response to a number of troubling and escalatory indications and warnings, the United States is deploying the USS Abraham Lincoln Carrier Strike Group and a bomber task force to the U.S. Central Command region to send a clear and unmistakable message to the Iranian regime that any attack on United States interests or on those of our allies will be met with unrelenting force,” National Security Adviser John Bolton said in a statement.

On Tuesday, Ravanchi dismissed the perceived threat from Iran as “fake intelligence based on certain narrow minded agenda, as I said, pursued by certain people in Washington, as well as in our region. They are making up these allegations in order to create fake stories.”

Ravanchi also dismissed a New York Times report saying that National Security Adviser Bolton directed Acting Defense Secretary Pat Shanahan to produce a plan to send up to 120,000 U.S. troops to the Middle East in case Iran attacks American troops or interests in the region or resumes its work on nuclear weapons.

“What’s your reaction to these plans?” Berman asked the ambassador.

On Monday, President Trump told reporters he’ll see what happens with Iran: “If they do anything, they will suffer greatly,” he said.

Berman asked the ambassador what he thinks the president means:

On another topic, Ravanchi said Iran was “definitely not” involved in the attack on four tankers in the Persian Gulf region: He accused “certain people in Washington” and others in the Middle East (Israelis and Saudis) of “spreading these lies to provoke, to prepare the ground for a conflict in our neighborhood.”