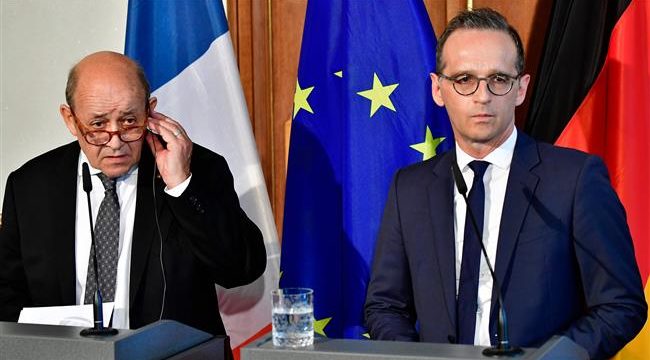 IRNA- The French positions as a member of the Iranian nuclear agreement has had many ups and downs and has given a distinctive but questionable role to Paris.

In the wake of Iran’s decisions to reduce the level its commitments in the framework of the JCPOA nuclear agreement with six global powers (on Wednesday May 8), British, German and French officials issued a joint statement expressing concern on the fate of the agreement.

The Europeans, also urged on their commitment to maintain the nuclear agreement, called on Tehran to take no further steps on the way out of the existing JCPOA and uphold its commitments. Europeans also rejected the two – month ultimatum by Iranian side on urging the Europeans to take effective steps in preserving the JCPOA.

In one of the most recent responses, French Foreign Minister Jean-Yves Le Drian in an interview with Le parisien on Saturday night, while expressing regret on Washington’s violation of its obligations and non-fulfillment of obligations, underlined the continuation of the talks with Tehran as Paris stance.

Elsewhere, he called as a ‘bad response’ Tehran’s reduction of its commitment in the JCPOA, and urged Tehran to remain committed to its commitment while showing its political maturity.

Before that, the French president spoke in a part of his response to Tehran’s recent decision to reduce its commitment to action.

Before that, the French president in a part of his response to Tehran’s recent decision to reduce its commitment to JCPOA, made considerable remarks. Emmanuel Macron, one day after the announcement of Iran’s deadline to European countries, made it clear that leaving the nuclear deal is an obvious mistake because it eliminates all ‘our efforts’. For this reason, France will remain in this agreement and will remain deeply hopeful that Iran will remain in it.

Of course, referring to the regional role and missile defenses plan of Iran, Macron said that the deal was not a complete agreement, and that after 2025, the end of the limitations of the JCPOA should be reviewed and more completed.

On the eve of Wednesday’s announcement, France had warned Iran’s withdrawal from a nuclear deal could restore sanctions and, as in the years before the agreement, it causes France to accompany with US sanctions.

On the start of April, the French ambassador to Washington published a controversial message on Twitter, stating that it would be wrong that if Iran is allowed to enrich uranium at the expiration of JCPOA. Under the NPT and its Additional Protocols, Iran, under severe monitoring, must prove that its nuclear activities has civilian nature.

Gerard Araud claimed, in the case that, NPT’s provisions are not being observed, even after the expiration of JCPOA, sanctions against Iran may be enforced.

He wrote, “As we said in 2002, enriching uranium without a credible civilian program is illegal under the NPT,’ he wrote. Similarly, in 2025, ‘we will be able to react if necessary. The sanctions that were imposed may come back. “

A look at the French positions shows that in various cases, especially the question of the “Sunset of JCPOA”, the period after the expiration of the Iran JCPOA limitations in 2025, as well as the legitimate and defensive activities of the Islamic Republic of Iran in the missile field, Paris has advanced to share views with the government of Donald Trump.

While the total of French diplomatic measures and actions before the departure of the United States of the JCPOA, and thereafter, some observers expressed the idea that Paris would take stronger steps against the violation of the commitments by Trump treaty.

What further reinforced this speculation was that some of Paris’ traditional approaches to confront Washington’s dominance on Europe since the end of World War II which was pursuing the goal of European independence and unity in areas such as confrontation with the American sanction against Cuba in 1996.

In addition, Macron traveled personally to Washington in late April 2018 to convince Trump to remain in the future.

With the intensification of disputes between the two sides, the ties between Macron and Trump got worse to the point that the president of the United States, following the idea of his French counterpart for the formation of a European united arm, attacked him in his Twitter on a trip to France in November last year..

On the other hand, French finance minister Bruno Lumer said a month before the start of the second round of the US anti-Iran sanctions that the sanctions were an opportunity for Europe to shape their financial institutions independently of the United States.

In the course of a year that the US has exited the Iranian nuclear deal, France tried to take some sort of double standards in the tensions between Tehran and Washington.

In spite of France’s support for Iran’s JCPOA stance, Paris proclaimed the toughest European position on the legitimate missile program of the Islamic Republic of Iran and, in practice, put weight on the unilateral approach of the US.

Many analyzed this kind of diplomatic maneuvering in the framework of the France’s desire to show power in the international arena. In the same way that France has been struggling since the beginning of this decade to play a major and powerful role in the development of countries like Libya and Mali.

A general overview of French policies, especially for the sake of JCPOA, shows that Paris has a great desire to play a major role in international affairs. However, the accountability, decisiveness and acceptance of costs of such a role are not proportionate to the behavioral facts of the Paris leaders.