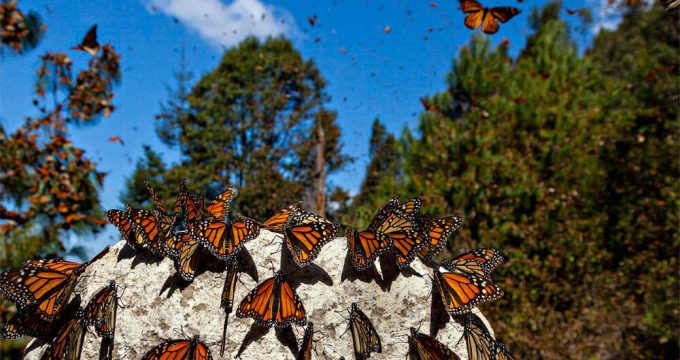 Tehran Times  – Great numbers of butterflies are taking to the skies of the capital, following rainy periods, Tehran City Council member has stated.

Their population increased due to the recent unprecedented rainfall, they will cause no damage to the agricultural lands as they are not considered as pests such as locusts, he added.

Alireza Naderi, a lepidopterologist, also explained that the butterflies with the scientific name of Vanessa cardui, are being observed in the city of Tehran due to increased rainfalls and cause no harm to the public health as well as crops.

Heavy spring downpours has helped more thistles to grow in the plains, hence more butterflies lay their eggs on them and greater number of them appeared in the city, he added.

These butterflies rarely lay their eggs on crops, Naderi said, stating that, with temperature rise and lower precipitations their population would dwindle away.

The butterflies will soon travel northward to other Iranian provinces with cooler weather conditions, he concluded.

According to the animaldiversity.org painted ladies (Vanessa cardui) are one of the most widely distributed species of butterfly, and can be found on all continents except Antarctica and Australia.

Painted Ladies live in areas with wide open areas of vegetation such as fields and meadows. However, they can be found in suburban, agricultural, swamp, bog, marsh, tundra, taiga, desert or dune, chaparral, forest, rainforest, scrub forest, and mountain habitats as well.

Butterflies have the typical four-stage insect life cycle. Winged adults lay eggs on the food plant on which their larvae, known as caterpillars. Some butterflies, especially in the tropics, have several generations in a year, while others have a single generation, and a few in cold locations may take several years to pass through their entire life cycle.

Butterflies are often polymorphic, and many species make use of camouflage, mimicry and aposematism to evade their predators. Some, like the monarch and the painted lady, migrate over long distances. Many butterflies are attacked by parasites or parasitoids, including wasps, protozoans, flies, and other invertebrates, or are preyed upon by other organisms.

Some species are pests because in their larval stages they can damage domestic crops or trees; other species are agents of pollination of some plants. Larvae of a few butterflies (e.g., harvesters) eat harmful insects, and a few are predators of ants, while others live as mutualists in association with ants. Culturally, butterflies are a popular motif in the visual and literary arts.

Butterflies are distributed worldwide except Antarctica, totaling some 18,500 species. Of these, 775 are Nearctic; 7,700 Neotropical; 1,575 Palearctic; 3,650 Afrotropical; and 4,800 are distributed across the combined Oriental and Australian/Oceania regions. Some 484 species are known in Iran.