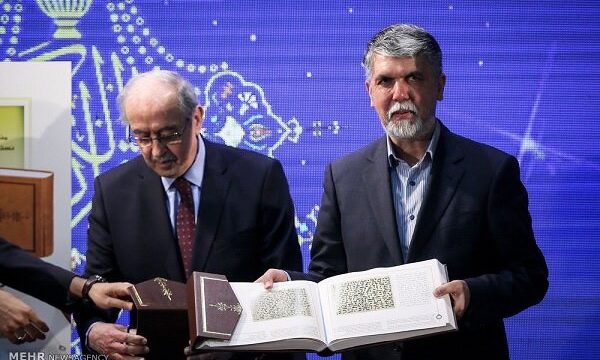 MNA – The 27th edition of International Quran Exhibition kicked off on Saturday evening with a special ceremony attended by Minister of Culture Abbas Salehi and a number of foreign guests.

The 27th edition of International Quran Exhibition kicked off at Tehran’s Imam Khomeini Mosalla on Saturday evening and will run for the next two weeks.

The Iranian Minister of Culture and Islamic Guidance Abbas Salehi and a number of guests from outside and inside the country attended the opening ceremony.

According to the deputy cultural minister Abdulhadi Feghhizadeh, as many as 10 Islamic countries have taken part at the exhibition, which is held over a vast area.

Feghhizadeh also said that the 27th exhibition is attended by more institutions in comparison with the previous years, adding all the activities during the event such as enrollment are automated.

Countries such as Pakistan, Turkey, Yemen, India, Iraq, Indonesia, Tunisia, Palestine, Afghanistan and Russia have been invited to participate in the 27th International Quran Exhibition.