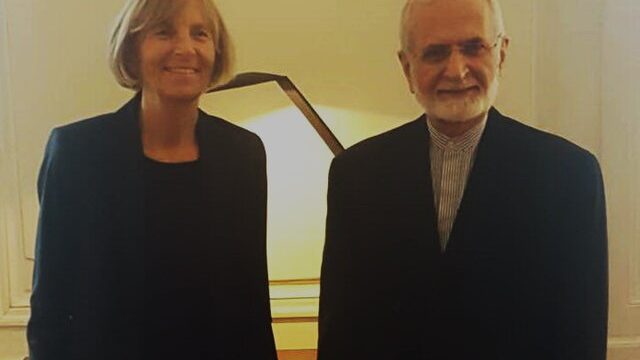 IRNA – Iranian veteran diplomat has urged the European Union to take practical steps to honor its commitments to the Joint Comprehensive Plan of Action in order to keep the nuclear deal alive.

‘It’s a good opportunity for Europe to make good on delays of taking action to salvage the JCPOA by functioning the Instrument in Support of Trade Exchanges (INSTEX),’ said Head of Tehran-based think-tank Iran’s Foreign Policy Strategic Council Kamal Kharrazi.

Kharrazi is currently on a visit to Paris to take part in ‘Paris Peace Forum’.
He held a meeting with Chair of the Foreign Affairs committee of the France National Assembly Marielle de Sarnez on the sidelines of the Peace Forum in Paris.

‘The Iranian people are heavily pessimistic about Europe because of their failure to comply with their commitments. Iranians have suffered major losses from EU compliance with Donald Tramp’s sanctions policies and their commitment to transnational decisions of the United States,’ Kharrazi said in the meeting.

‘Islamic Republic of Iran negotiated honestly and, as a result, a nuclear accord approved by the UN Security Council Resolution 2231, but, despite Iran observed its own commitments to JCPOA, Europe has only made a sufficiently political position yet to fulfill them in practice,’ Kharrazi said.

Marielle de Sarnez said that she was pleased with the meeting, adding that Iran is a great country and the European Union expects Iran to abide by the JCPOA.

Marielle de Sarnez expressed concern about Iranian declaration on reduced commitment to JCPOA and possible exit of Iran from the JCPOA, saying that such a decision can put the positive results and the stability created after the nuclear deal at risk.

On May 8th, Iran revealed countermeasures to US’ withdrawal from the nuclear deal, removing restrictions on storage of heavy water and enriched uranium, and giving the five remaining parties to JCPOA 60 days before reducing further commitments to the agreement.

“In line with protecting the security and national interests of the Iranian people”, the Supreme National Security Council ordered stop to implementation of some parts of commitments of the Islamic Republic of Iran under the JCPOA according to articles 26 and 36 of the agreement.