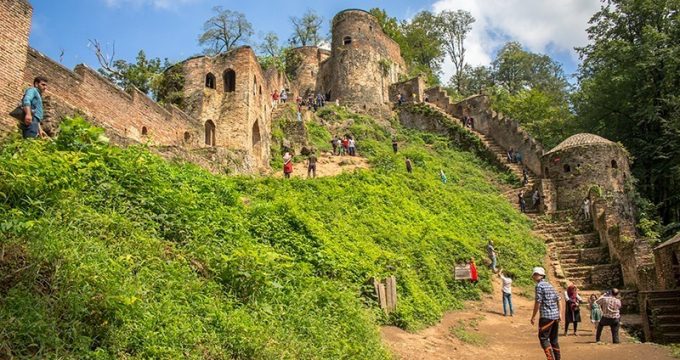 Tehran Times – Rudkhan Castle is a brick and stone medieval castle in Iran. It is 30 km away from the city of Fuman and just nearby its hiking starting point, lays the village of Rudkhan. To reach the castle, there are hundreds of stairs to climb and that is one of the reasons this castle is also known as “The Thousand Step Castle”.

Rudkhan Castle was a military medieval fortress built during the Sasanian Empire (224 – 651 CE) to defend the northern part of the country from southern Arab invaders. This large castle has been renovated and strengthened several times throughout the centuries.

For most of the duration of its life, the castle has been mostly used for uprisings and riots against the central power in the country, and even though it has gone through a huge amount of violence and brutality, it still stands strong, hidden in the middle of northern Gilan’s jungles. In fact, Rudkhan Castle is one of the best well preserved remains of fortifications in ancient Iran.

This one-thousand-year old castle is built with an area of 2.6 hectares and sits smartly at the two peaks of a mountain with 670 and 715 m tall and occupies 50,000 square meters of area. It is also reinforced by strong fortifications and battlements at a length of 1,550 meters. While constructing the fort, the architects benefited from the natural mountainous features of the territory. The castle’s 42 towers still stand intact.

The castle consists of several parts, most notable of which are the water reservoir, twelve gates, the prison, 42 watchtowers, housings, and the king’s quarters. The king’s quarters are located on the highest point of the castle and feature breathtaking views of the surrounding area. Castle has two sections, namely one royal residence for the king and royal family, and another residence for soldiers and military activities. The east side of the Fort is a bit smaller and has more military characteristics.

There is such a river called Rudkhan Castle River, which flows near the castle, stretching from south to north. After passing through the dense forests, the big entrance gate of the castle catches your eye at the first. It is situated on the northern side of the castle and has a gate and two towers on its two wings.

To reach the castle, you need to hike in the jungle. Depending on how prepared you are, this hike can take from 1 to 2 hours. The path towards the castle is clearly marked and there are numerous small vendors on your path. The steep path to Rudkhan Castle makes it seem unreachable for some travelers, but all who have reached the castle would agree that the beauty of the jungle and the path itself are what make this hike worthwhile.

The best season to visit Rudkhan Castle is in spring and summer and visiting this area is a bit hard due to it is located in mountains in fall and winter.

If you are visiting Gilan province, don’t miss the chance to see Rudkhan’s outstanding castle. It is highly recommended to start your hike early in the morning (especially in summer, when it can get very hot and humid during the day), so you can enjoy your visit in a less crowded environment.