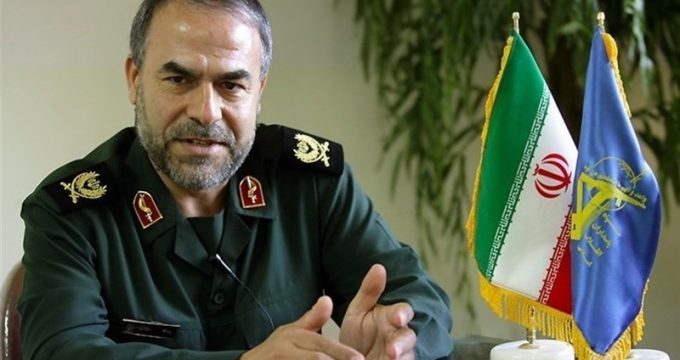 IRGC says US doesn’t dare to wage war on Iran

Press TV – A senior IRGC official says the Trump administration does not dare to wage a war on Iran despite its recent deployment of an aircraft carrier and bombers in the Persian Gulf.

“The American officials are suffering from some mess in their thoughts,” Brigadier General Yadollah Javani, a political head of the Islamic Revolution Guards Corps (IRGC), said Friday.

He said Americans think they can intimidate the Iranian nation and force officials to sit for talks by combining military rhetoric with sanctions and economic pressures. But the Iranian nation well knows the scenario, and considers the US untrustworthy.

The aggressive rhetoric the US has adopted against Iran is just part of a mechanism that the American officials have devised in line with their sanctions to make them more practical, the top general added.

The US Air Force acknowledged Friday that B-52 bombers ordered by the White House to deploy to the Persian Gulf to counter unspecified threats from Iran have arrived at a major American air base in Qatar.

Others landed at an undisclosed location Wednesday in “southwest Asia,” the Air Force said. The US military in the past has described its presence at both the Al Dhafra Air Base in the United Arab Emirates and Al Udeid as “southwest Asia.”

On Sunday, the White House announced it would send the USS Abraham Lincoln aircraft carrier strike group and the bombers into the Persian Gulf to counter Tehran. The Lincoln on Thursday passed through the Suez Canal on its way to the Persian Gulf.

The commander overseeing US naval forces in the Middle East told Reuters on Thursday that American intelligence showing a threat from Iran will not prevent him from sending an aircraft carrier through the vital Strait of Hormuz, if needed.

Vice Admiral Jim Malloy, commander of the US Navy’s Bahrain-based Fifth Fleet, did not say whether he would send the USS Abraham Lincoln carrier strike group into the strategic waterway off Iran, through which passes a fifth of oil consumed globally.

“If I need to bring it inside the strait, I will do so,” Malloy said in an interview by phone. “I’m not restricted in any way, I’m not challenged in any way, to operate her anywhere in the Middle East.

US Special Representative for Iran Brian Hook told BBC Persian on Thursday that the deployment of US forces in the Middle East are “defensive” moves against Iran. Without elaborating on the details, he claimed the US has relocated its forces in the region after it received reliable evidence from various sources, showing Iran is conspiring to attack the US interests and those of its allies in the region.

Also in a highly unusual move, Bolton convened a meeting at CIA headquarters last week with the Trump administration’s top intelligence, diplomatic and military advisers to discuss Iran, according to six current US officials.

National security meetings are typically held in the White House Situation Room. The six current officials, as well as multiple former officials, said it is extremely rare for senior White House officials or Cabinet members to attend a meeting at CIA headquarters.

Despite all these claims, the Trump administration has yet to offer specific details of the threat allegedly presented by Iran.

On Tuesday, the American Daily Beast news website cited informed US government sources as saying that the Trump administration had “inflated” the alleged “threat” from Iran.

“In this case, there is not a consensus in intelligence and military circles on whether the administration’s interpretation, used to justify the deployment of an addition US aircraft carrier and Air Force bomber task force to the Persian Gulf, was accurate,” read the report.

Speaking on Thursday, Iranian permanent envoy to the UN Majid Takht Ravanchi slammed the allegations, saying they were based on “fake intelligence”.

“These are all allegations that are being produced by the same people who to the run-up to the US invasion to Iraq, did the same,” he said, referring to the US’ false claims of Iraqi weapons of mass destruction (WMDs) that lead to the 2003 invasion of Iraq.

Trump on Thursday said he wants Iranians to call him, and said the United States and Iran could make a fair deal.

“What I would like to see with Iran, I’d like to see them call me,” Trump told pool reporters on the sidelines of an event in the White House on surprise medical billing.

“What they should be doing is calling me up, sitting down,” Trump said. “We can make a deal, a fair deal.”