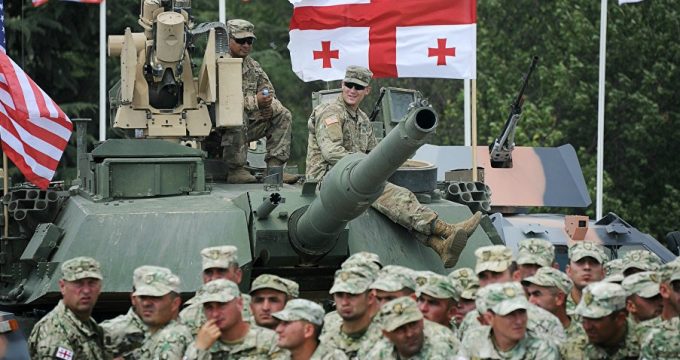 Why is Georgia conservative about hosting US base?

Alwaght – The US activities in Central Asia and the Caucasus has a long record, dating back to the Cold War and the bipolar world. Still, even after the collapse of the rival Soviet Union in the early 1990s, Washington did not abandon its greed for a foothold in the regions.

Georgia is one of the regional countries in the Caucasus where the Americans have always preserved their military and security presence and activities in the face of post-Soviet Russia. So far, there has been repeated news about the US intention to set up a military base in Georgia. However, this idea to date has not advanced.

What is behind the American military base in Georgia and why has it so far gone nowhere?

Record of US activities in Georgia

Like many other regional countries, for years Georgia has been a setting for the US-Russia confrontation. Even the 2008 war of South Ossetia, which ostensibly was a war between the central Georgian government and the pro-Russian separatists, was, in fact, a proxy encounter of Washington and Moscow. While the Americans offered full-scale support to their Georgian allies, the Russians strongly stood by the secessionists who sought to break with Georgia to found their own republic.

At least after the 2008 clashes, the US and Georgia engaged in further military and security cooperation. Tbilisi actively took part in joint war games with the NATO. Furthermore, it signed some security and military pacts with Washington. The pacts opened the way for the NATO members to conduct military drills at least two times last year on the Georgian soil. The concerned Russia was watching the moves closely, of course.

Establishing a military base over the past few years has been an obsession for the American officials regarding Georgia. In 2017, Levan Izoria, then Georgian defense minister, in a meeting in Berlin with General Antonio Augusto of the US army signed a deal that will allow the US to set up a military training base in Georgia similar to that in Germany. But two years have gone and the US has failed materializing the pact. The recent US moves to establish the base are a tail to the 2017 agreement with Tbilisi.

The US difficult way in Georgia

It does not appear that the new Georgian government agrees with a US military base on its soil. A couple of days ago, Salome Zourabichvili, the new Georgian president in an interview with VOA broadcaster said that allowing the US to build a military base in Georgia was an illogical and inappropriate decision and could act as a provocative factor. After these comments, Georgian Prime Minister Mamuka Bakhtadze also set some conditions for the US and added that Tbilisi leaders will make decisions based on the national Georgian interests.

With the new Georgian leaders openly opposing a US base in their country, the Pentagon will have difficulty in getting Tbilisi to its side.

The new government in Georgia came to power in December 2018. It seems that it does not want to once again make the country a play court for Washington and Moscow.

Despite the fact that Zourabichvili won a runoff with backing from the pro-Western ruling party, she calls herself an independent figure. After the win, she expressed support for relations with Europe but at the same time called for warm and friendly relations with the northern neighbor Russia.

In fact, the new government seeks a moderate policy in the middle of Washington-Moscow rivalry to avoid possible harms.

There is no doubt that an American military base in Georgia will draw a Russian response characterized by installing missile systems to watch Georgia and amass forces on the Georgian border. Such developments will raise the risk of friction and war and cause a shrinkage in foreign investment and tourism in Georgia.

That is why the current government in Tbilisi does not seek an American military center on its territory, despite the moves to shore up security and military partnership with Washington. This policy is aimed at avoiding arousing the ire of Russia and will stand as the main challenge ahead of the American policy in the Caucasian nation.

Georgia, NATO, US military bases May 9, 2019
The message Iran should have for Europe
Trump slaps new US sanctions on Iran’s metals industry