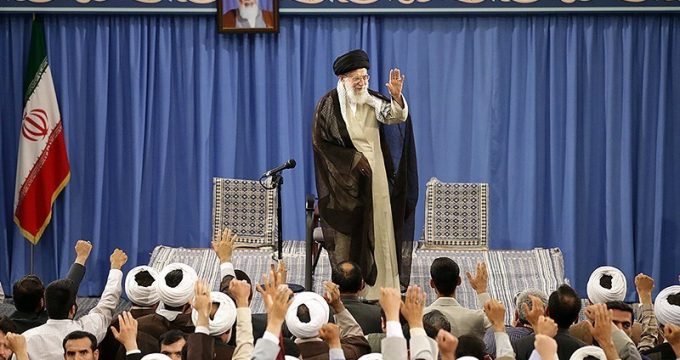 MNA – The Leader of the Islamic Revolution Ayatollah Khamenei on Wednesday described the general public as interested in religion, thus making it a heavier responsibility for the seminary schools to address public demands.

On the second day of the auspicious month of Ramadan, a group of students of seminary schools (Hawza Ilmiyah) met with the Leader of the Islamic Revolution Ayatollah Khamenei this afternoon May 8, 2019.

According to ‘Khamenei.ir’, in the meeting, the Leader described the general public as interested in religion, thus making it a heavier responsibility for the seminary schools to address public demands and stressed “some say the people have distanced from the religion but the truth is something else.

Today, the responsibility of the seminaries have become heavier than the past; the reason is that the need and acceptance have increased. Today, the youth of the Muslim world and even outside show interest in elevated and prominent religious concepts.”

Ayatollah Khamenei compared the interest in religion among the public as more sophisticated than in the past and held “previously, there existed strong beliefs, yet it was not manifested by knowledge. In Tehran, Sheikh Fazlollah was hung in the center of the city. Some cried here and there, but no real action was taken, even though at that time the government of Reza-Khan was not in place yet.

Ayatollah Khamenei praised the memory of a clergy who was beaten to death in Hamadan in hate crime and referred to the strong public reaction to it, stating that “now compare this with the strong reaction that followed the martyrdom of the seminary student in Hamadan, getting echoed all across Iran. If that funeral had happened in Tabriz or Tehran or anywhere else in the country it would have happened with the same zeal.”

The Iranian Leader went on to say “now some would say that people have distanced themselves from religion. When we were students at the seminary, never in any city or at any gathering, you would see such religious assemblies as you see today, not even a tenth of it. The religious sums that people give away today show the extent of their practice.

Ayatollah Khamenei criticized baseless comments about public’s respect for the clergy, asserting that: Many comments are made with no knowledge. But the clergy are respected, and despite the propaganda, the facts speak for themselves. This makes our responsibility greater.”

He advised the seminary students and clergy to move beyond promoting Islamic teachings and establish an understanding of Islam among public and maintained “Islam is not only about giving teachings; it is also about the practical fulfillment of those teachings.”

Ayatollah Khamenei described hawzas (Seminary schools) as a hub of Islamic teachings and said “the seminary is at the center of Islamic teaching. Islam should be understood. We might reduce Islam to principles, subsidiaries, values, and lifestyles as well as methods of governing—even though they are all necessary, however, this represents only a part of the duties of the seminary and only a part of Islam.”