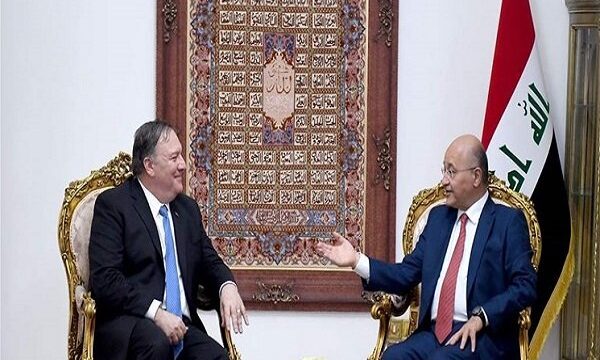 US Secretary of State Mike Pompeo made an unannounced visit to Iraq on Tuesday, involving meetings with high-ranking officials, including Prime Minister Adel Abdul-Mahdi and President Barham Salih.

An informed source told Iraqi satellite TV network Alsumaria that during the meeting between Pompeo and Iraqi President Barham Salih, the two sides stressed an extension to Iraq’s waiver exempting it from sanctions to buy energy from Iran.

On April 22, US President Donald Trump announced that he would not renew waivers that allow eight countries, including Iraq, to buy Iranian oil without facing Washington’s sanctions, in a bid to bring the Islamic Republic’s oil exports to zero.

The Iraqi source went on to add that during the Tuesday meeting, it was also stressed against any measure that would escalate tension with Iran.

Iran supplies Iraq, as one of the Islamic Republic’s major and most important energy clients, with electricity and gas for its power plants.