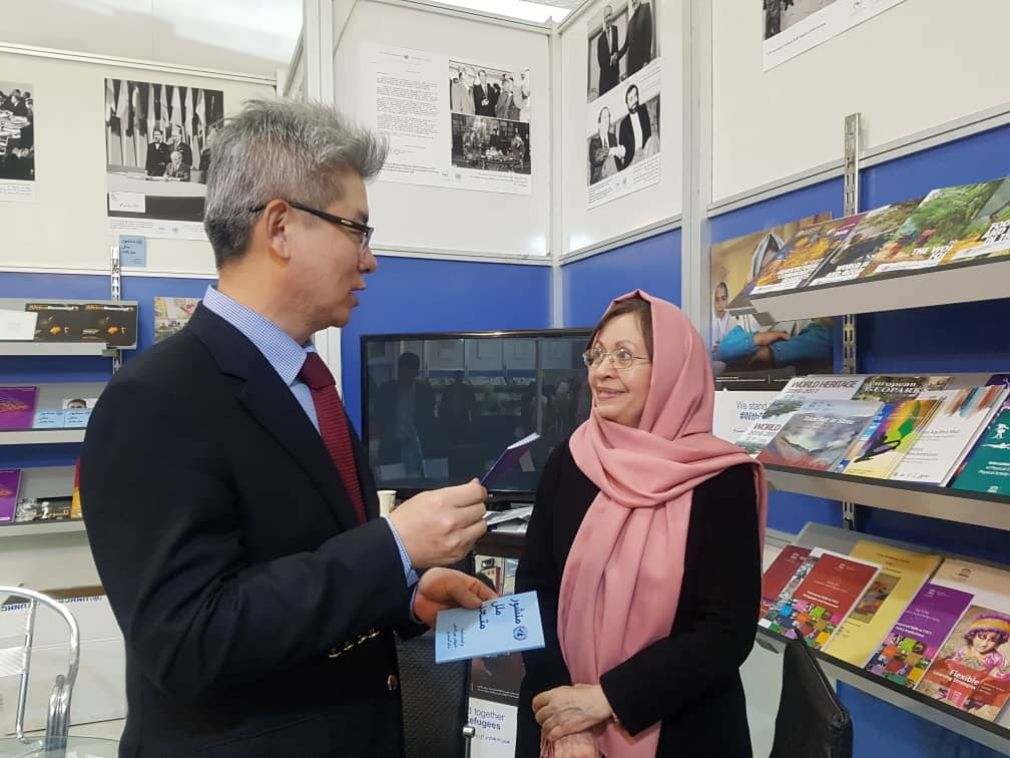 United Nations Iran – The 32nd Tehran International Book Fair was opened on April 23 under the theme “Reading Is Ability” in a ceremony attended by the Minister of Culture and Islamic Guidance, Seyyed Abbas Salehi, and other high-ranking officials and foreign diplomats at the Musalla of Imam Khomeini (Tehran Prayer Ground).

China was the special guest of this year’s International Book Fair. Some 2,400 Iranian publishers displayed 300,000 book titles, while about 800 foreign publishers showcased 137,000 of their latest publications.

During the 11-day book fair, many people visited the UN booth, where UN multimedia multilingual information materials including books, reports, pamphlets, flyers, CDs, videos and posters were displayed and given to the public for free.

UNIC interns and other UN colleagues explained to the visitors the work and achievements of the UN in Iran.  Ms Nazanin Ghaemmaghami, UNIC Public Information Assistant, gave live interview to the Radio Farhang (Culture Radio) and Radio Ketab (Book Radio).

“I and my peers from the University enjoyed the direct and open dialogue with the UN, they really answered all our questions. Now I and my friends are motivated to engage to promote UN values,” said Fatemeh Akbari, student of University of Tehran.

Ms. Ghaemmaghami said: “The UN booth was extremely visible because of the enthusiastic efforts of UN agencies’ staff, UNIC interns and volunteers. We really appreciate the support of the organizer of the Fair, Ministry of Culture, and Islamic Guidance as well as the Ministry of Foreign Affairs, that provided the UN with the prominent venue for the UN booth”.

UNIC Tehran has coordinated the participation of the UN Agencies at the Tehran International Book Fair for sixteenth years.