Iran and the United States: Doomed to be forever enemies?

The New York Times | Carol Giacomo: President Trump and hard-line advisers want to isolate and undermine the government in Tehran. Engagement is a better option.

John Limbert belongs to an exclusive club — the 52 American diplomats held hostage by Iran for 444 days during the 1979 Islamic Revolution. Since that crisis, which began 40 years ago next month, the two countries shared an enmity that has only grown worse under President Trump.

Secretary of State Mike Pompeo raised the rhetorical stakes earlier this month when he urged the world to isolate Iran and promised to “expel every last Iranian boot” from Syria. The United States and Iran are so hostile one wonders whether they will be enemies forever.

“I’ve thought about that a lot,” Mr. Limbert said in an interview. At 75, he remains fond of Iran and committed to helping Americans understand the country, but he finds the bilateral dynamic more dangerous than ever. “I think the best we can hope for is not to get into a war,” he said, setting a low if tragically realistic bar.

In theory, no Islamic country is better positioned than Iran to play a leading role in the Middle East, because of its location, its wealth and the sophistication of its people. But that potential has been stunted because of Iran’s continued meddling in Syria, Yemen, Iraq and Lebanon, and an antipathy for the United States that is mutual and obsessive.

Both sides are to blame, with hard-line leaders demonizing each other in a struggle to satisfy their constituents and maintain power. Excoriating the “Great Satan” is central to Iran’s defense of its revolution and its religious underpinnings; the administration has made intensifying pressure on Iran a central tenet of its foreign policy.

Mr. Pompeo and John Bolton, the national security adviser who before joining the administration called for regime change and military strikes on Iran, are driving the hard-charging approach.

In September, Mr. Bolton requested military options after Iranian-backed militants fired three mortars or rockets into an empty lot on the grounds of the United States Embassy in Bagdad. No action has been taken.

After his much-criticized speech in Cairo, which denigrated President Barack Obama’s overtures to Iran and the Muslim world, Mr. Pompeo is doubling down by hosting a meeting in Poland next month that aims to unite countries in an anti-Iran coalition to “confront the ayatollahs, not coddle them.” 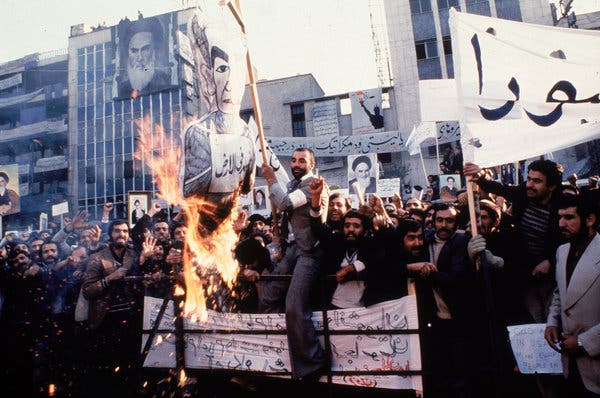 In 1979, protesters burned an effigy of Shah Mohammad Reza Pahlavi in front of the United States Embassy in Tehran. CreditAssociated Press

The United States and Iran have been adversaries for so long it’s hard to remember that they were close partners after Mohammed Reza Pahlavi came to power in 1941. During World War II, Iran was a supply route for Lend-Lease aid to the Soviet Union. In 1957, President Dwight Eisenhower gave Iran technology for a peaceful nuclear energy program. Under President Richard Nixon, Iran became the guardian of American interests in the Persian Gulf.

But Iranian resentment had been simmering since 1953, when the United States and Britain overthrew a democratically elected Iranian prime minister, allowing the shah to return to power. With the 1979 revolution, Iranians ousted the shah for good and established a rigidly conservative, Shiite theocratic state.

The hostage crisis poisoned American views of Iran, but so did Iran’s hostile statements and its sponsorship of militant groups and terrorist attacks, including the 1996 bombing of Khobar Towers in Saudi Arabia that killed 19 American airmen.

More recently, Iran’s hostility toward Israel; its attacks on American troops in Iraq; its support for Hezbollah in Lebanon, the Assad government in Syria and the Houthis in Yemen; its growing missile program; and suspicions that it might use its nuclear program to produce weapons added to the concerns.

Iran has grievances, too: President Ronald Reagan’s support of Iraq over Iran in their 1980-1988 war; the accidental downing of an Iranian civilian airliner over the Persian Gulf by an American naval cruiser in 1988 that killed 290 people; and decades of sanctions intended to change Iran’s behavior. 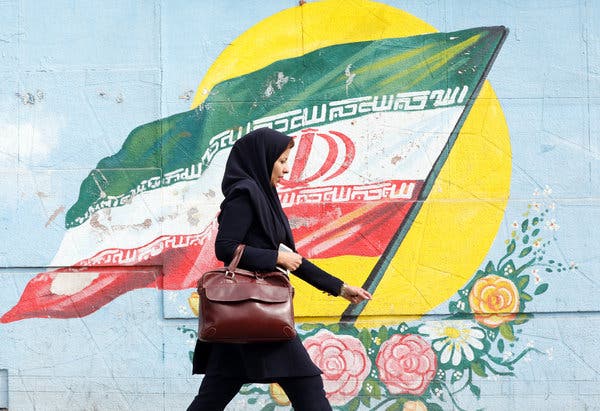 A woman passes a patriotic mural on a Tehran street. CreditAbedin Taherkenareh/EPA, via Shutterstock

In America, where few people have visited or studied Iran, polls show there is little to gain politically from pursuing a more cooperative approach. The American Israel Public Affairs Committee, the Iranian opposition group Mujahedeen Khalq and Saudi Arabia, all with longstanding anti-Iran agendas, have intensified their lobbying for punishment over engagement.

Such pressure, coupled with Mr. Trump’s enmity for his predecessor, led him last year to tear up the 2015 Iran deal, squandering a unique opportunity. The agreement not only curbed Iran’s nuclear program, it created potential space for Iran and the West to gradually lessen their hostility and expand cooperation.

Iran is still abiding by the three-year-old deal. But Iran has not halted its regional aggression, giving Mr. Trump a rationale for portraying it as an implacable foe that should be bullied and punished with sanctions.

There is no doubt that a more democratic Iranian government is to be desired. But any changes should begin with Iranians, not an outside power like the United States.

Meanwhile, Iran’s anti-American policies shouldn’t preclude bilateral engagement. Despite America’s waging more than a decade of war in Vietnam, relations with Hanoi today are flourishing. Even at the depths of the Cold War, the United States and the Soviet Union found ways to cooperate, including on arms control and human rights.

If Mr. Trump cares about stabilizing the Middle East, he has to engage Iran, as he offered to do as recently as last summer. But the atmosphere between the two countries remains sulfurous, and even Mr. Limbert, who would like to visit Iran with his children and grandchildren, doubts he will ever be allowed to return. “I remind them of something in their past that they would rather not think about,” he says.

Carol Giacomo, a former diplomatic correspondent for Reuters in Washington, covered foreign policy for the international wire service for more than two decades before joining the Times editorial board in 2007.