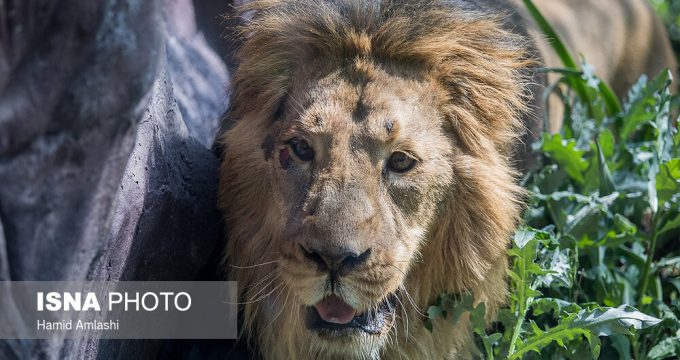 Will recently returned Persian lion survive threats once pushed it toward extinction?

MNA | Faranak Bakhtiari: Long-lost Persian lion is back to the country to conserve the rare species by reproduction, the species which once gone extinct due to excessive hunting and habitat loss, so the question arises, will the endangered species survive the threats which once pushed it through eradication?

Disappeared for 80 years, Persian lion once prowled from the Middle East to India, while currently only a fraction of these magnificent animals survive in the wild, which range is restricted to the Gir National Park and environs in the Indian state of Gujarat.

On the International Union for Conservation of Nature Red List, it is listed under its former scientific name Panthera leo persica as Endangered because of its small population size and area of occupancy.

Conflicts with humans, wildfires, poaching, habitat loss, canine distemper virus, decreases in population sizes of native ungulates were among the threats pushed the lions toward extinction in Iran, while lack of protection measures and plans is not deniable either.

A male Persian lion, born 6 years ago, was sent to Tehran Zoological Garden from Britain’s Bristol Zoo a week ago, under a population management program aiming at endangered species reproduction by the European Association of Zoos and Aquaria (EAZA).

Under the program, European Endangered Species Programme recommended that a lion couple to be brought to Iran in order to conserve and recover the species once again in their original habitat employing disease control measures.

Iran will soon host a female lion of the same subspecies from Ireland to accompany the recently returned male lion through the conservation program.

However, questions come up that will the world’s last ranging population of Persian lion raises hope for the species conservation? Does it ensure a stable lion population in the country?

First attempts to bring back the precious species

In the Iranian calendar year 1350 (March 1971-March 1971), Iran made attempts to bring back Asiatic lion to Iran, under an international project aiming to revive the country’s natural habitats, but it faced Indians opposition.

The project was called Arzhan due to the fact that lions once ranged in Dasht-e Arzhan, to Parishan Lake both located in Fars province.

Under the project, Iran was supposed to send 4 Asiatic cheetahs to the India and receive 12-16 Asiatic lions in return.

Hooshang Ziaei, an environmental expert, told Khabaronline that we made great efforts for the project which mainly focused on rehabilitation of habitats.

In this regard, we bought some of the rainforests in proper areas and enhanced the population of wild boar, gazelle and ovis orientalis in these areas, he said, adding, then we increased the population of Persian fallow deer, so that the lion’s habitat was prepared.

However, India did not cooperate and the project left unattended, he regretted, adding, the area’s environment also bearded severe damages that led Parishan lake to be dried up.

No concern rises toward the species habitat

This is while, some of the past experiences have caused some environmentalists to be concerned about the Persian lion’s future in Tehran Zoological Garden, as in the Iranian calendar year 1389 (March 2010-March 2011), 14 lions died in the Zoo due to an outbreak of glanders (an infectious disease occurs primarily by ingestion of contaminated food or water), which is mainly related to not meeting the standards.

Mohammad Reza Parhizkar, head of Tehran Zoological Garden, told Khabaronline that “we put in efforts to bring back Asiatic lion for 6 years, so it can be a new beginning for the species to live in its motherland once again.”

He went on to note that I believe that it was a positive attempt to help the generation of the species and revive the country’s wildlife.

Lions are returned to the country due to the membership of the Tehran Zoo in EAZA, and the organization never allows the wildlife species to transfer to a zoo not meeting the internationally defined standards, Parhizkar also added.

Pointing to the traumatic event, he said that the condition is improved compared to 8 years ago, the Zoo is living up to the required standards, and take safety measure strictly to prevent such happenings.

So there is no concern about the condition and the place where the animal is being kept, he said, adding that of course, there are still several steps to be taken to conserve Persian lion in the country, perhaps many measures needed to be carried out in this regard.

Referring to the lion couple’s future habitat, he noted that Dez forests, in Dezful county located in Khuzestan province, seems to be a proper habitat for the lions due to the presence of fallow deer species, with fencing the roads taken into consideration.

Although, several studies must be carried out to determine their natural habitat precisely, he said, highlighting that if the studies demonstrate negative consequences, reproduction of the species in the country will be avoided even through captive breeding in the zoos.

Until the 19th century, it occurred in eastern Turkey, Iran, Mesopotamia, and from east of the Indus River to Bengal and Narmada River in Central India. Since the turn of the 20th century, it is restricted to the Indian Gir Forest National Park and surrounding areas.

Historical records in Iran indicate that the Asiatic lion ranged from the Khuzestan Plain to the Fars in steppe vegetation and pistachio-almond woodlands. It was widespread in the country, but in the 1870s, it was sighted only on the western slopes of the Zagros Mountains, and in the forest regions south of Shiraz.

Some of the country’s last lions were sighted in 1941 between Shiraz and Jahrom in Fars province, and in 1942, a lion was spotted about 65 km northwest of Dezful. In 1944, the corpse of a lioness was found on the banks of Karun River in Khuzestan province.

Persian lion to remain in Iran

Although, current weather and other conditions in the country seems appropriate to bring the invaluable species back to the motherland again, protection plans must be drawn up defining the related issues along with taking necessary measures to prevent the species from facing the threats resulted in their eradication before.

Studies on recognizing the favorable habitat for the lions, enhancing the protected areas as well as the rangers, increasing the species’ prey, highlighting the role of NGOs on reintroducing this species, making people acquainted with the endangered species and training the locals to know the value of the Persian lion and prevent any illegal capturing of the animal are among the solutions to ensure a stable lion population in the country.