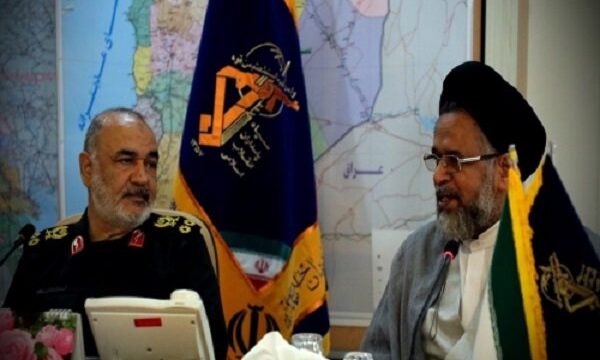 Press TV – The chief commander of Iran’s Islamic Revolution Guards Corps (IRGC) says the force’s intelligence arm and the country’s Intelligence Ministry are engaged in a “round-the-clock war” against enemies.

Major General Hossein Salami said during a meeting with Intelligence Minister Mahmoud Alavi at the IRGC Joint Staff Headquarters in Tehran that Iran’s intelligence community is “usually moving ahead of the enemy.”

“Today, we are engaged in a serious, global round-the-clock intelligence war with enemies,” Salami said Sunday.

He described the IRGC Intelligence and the Intelligence Ministry as ” the two sharp eyes” of the Islamic Revolution which “complement each other on the battlefield.”

Salami highlighted the importance of Iran’s intelligence work, saying, “Today, the intelligence factor contributes to the country’s prestige and if the enemy faces our strong will, it will back down.”

He called for awareness in the face of enemy plots but made it clear that none of the adversaries are to be overestimated just on the basis of their psychological warfare and media propaganda.

“Today, our enemies appear scary and buff but deep inside they suffer from severe osteoporosis,” he added.

Alavi, for his part, congratulated General Salami on his recent appointment as the new IRGC chief and hailed close ties between the two intelligence organizations.

“We hope that, hand in hand with our IRGC brothers, we can accomplish our critical mission to protect the country and the Islamic Revolution in the best possible manner,” he continued.

Earlier this month, Alavi revealed that Tehran had identified 290 US Central Intelligence Agency (CIA) agents across different countries, forcing Washington to form a special committee to reassess its cloak-and-dagger operations.

He made references to what US spy experts have described as a major intelligence defeat for America.

Alavi pointed to a November 2018 Yahoo News article that said Iran’s intelligence had gained access to a secret CIA communications system, allowing Iranians to not only discover and detain US assets in the country, but also probably share key findings with Chinese and Russian authorities.

The Iranian intelligence chief added that as many as 114 Takfiri terrorist teams, 116 Mujahedin Khalq Organization (MKO) teams, 44 teams seeking to overthrow the Iranian government and 380 drug smuggling bands had been busted over the past year alone.

He said the intelligence community of Iran had neutralized 188 other criminal groups, including four people who were recently arrested southwest of the country along with 15,000 AK-47 rounds.