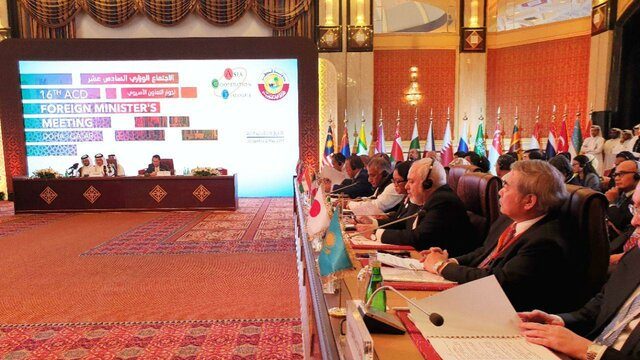 IRNA – Relations between Iran and Qatar have always been politically widespread and important, and as an expert on Middle East affairs says the visit of Iran’s foreign minister to Doha is very important and timely in the current juncture.

Iran and Qatar have had very close friendship from the neighborliness point of view for a long time. In June 2017, Saudi Arabia, Egypt, Bahrain and the United Arab Emirates (UAE) cut diplomatic ties with Qatar, on the accusation of causing instability in the region. These countries accused Qatar of supporting terrorist groups, including those associated with Iran.

The tensions between Qatar and Saudi relations rose when Qatari emir was quoted as saying by the official news agency. The statement’s attributed to Sheikh Tamim bin Hammad Al Thani, who called Iran a great power and guarantee of stability in the region, and had considered Hamas to be the Palestinian representative.

After Saudi Arabia boycotted Qatar, Iran also allocated one of its own ports to facilitate the transfer of goods and food to Qatar, and left its air space open to Qatari airlines.

Considering the importance of the issue and visit of Iran’s Foreign Minister to Qatar, the Islamic Republic News Agency (IRNA) interviewed Mohammad Saleh Sedqiani, director of the Arabic Center for Iranian Studies and Middle East expert on this subject.

Sedqiani said at the beginning of the interview that Zarif’s trip is timely and important at this juncture; Qatar is considered a member of the Persian Gulf Cooperation Council. Now that there is a tension between Qatar and Saudi Arabia, it has a good relationship with the Islamic Republic of Iran, and Tehran can use this opportunity against Saudi influence in the region.

Adding that Qatar is a rich country with a strong potential in the realm of economics, the expert noted it can help Iran in the economic sphere, given the hostile sanctions of the US government against Iran.

The Middle East expert went on to say, “At the time of Saudi cruel sanctions against Qatar, Iran stood beside Qatar, declaring that we oppose sanctions imposed on Qatar and that sanctions are not a good option against nations, and that governments can, in times of conflict, use the dialog option.’

He noted that Qatari Emir commended Iran’s stances on Saudi Arabia’s sanctions imposed on the country, and the dinner party, which the Emir of Qatar itself was attending, highlighted the importance of the trip and the proximity of Iran-Qatar relations.

** Saudi effort to isolate Qatar and prevent ties with Iran

According to Sedqiani, Qatar is a member of the Persian Gulf Cooperation Council (PGCC), which includes Arab countries of Kuwait, Oman and Qatar, and since the day Qatar has been banned, this council has been overshadowed and the absence of Qatar has weakened the council in the political and economic field.

Director of the Arabic Center for Iranian Studies and Middle East expert added that Qatar has threatened several times to exit the council and the council will not be able to survive if Qatar leaves because Oman and Kuwait also have good relations with Qatar and they raised their strong protests.

The analyst also said that Saudi Arabia is trying to isolate Qatar, and if pressure and sanctions continue, Qatar will have to withdraw from this council, and Saudi Arabia will be considered as the main sufferer when the PGCC is weakened.

The Middle East expert also said that Iran had a deep divide with Qatar on the Syrian issue, but these differences never made it possible to cut relations with Qatar.

‘At that juncture, friendly ties between Doha and Tehran remained and the Islamic Republic and the Qatari side managed these relations and did not allow tense relations to take place, despite the Saudi government’s efforts to pour fuel.’

Sedghian, director of the Arabic Center for Iranian Studies, highlighted, ‘Given the holding of the Asia Cooperation Dialogue (ACD) Summit in Qatar, this could be an opportunity for Iran to use it as defense against the US government’s sanction on Iran.”

The expert concluded, Iran’s relations with 15 neighboring countries and East Asian countries are a good and friendly relationship and our political relations have become stronger with the Asian countries than before, and I think that while the majority of the organization are from Asia, it helps our country’s stances against sanctions in the region.