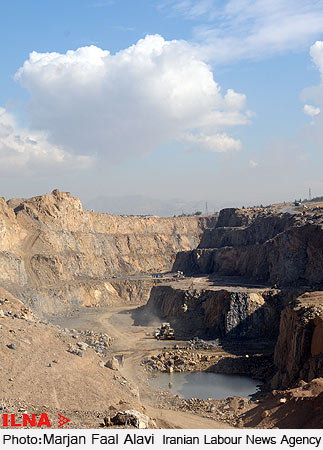 Tehran Times – Iranian mining sector witnessed some prominent growth both in production and export during the past Iranian calendar year (ended on March 20, 2019).

According to the data released by Iranian Mines and Mining Industries Development and Renovation Organization (IMIDRO), the value of Iran’s minerals and mining industries’ exports stood at $9.226 billion in the past year.

IMIDRO data indicate that the steel products account for the lion’s share of the exports from this sector in the past year, with the value of $4.1 billion.

The organization has also reported that production of iron ore concentrate has increased 17 percent year on year as the country produced over 45.4 million tons of the product during the past year.

Meanwhile, Iran produced 276,575 tons of aluminum ingots in the past year.

The released data show that Iranian Aluminum Company (IRALCO) accounted for producing 53 percent of the total aluminum ingot output in the previous year.

As the world’s 18th producer of aluminum, Iran plans to reach the annual production of 1.5 million tons of aluminum ingot by the Iranian calendar year 1404 (March 2025-March 2026).

The rising trend of growth in this sector is planned to be continued in the current calendar year, as IMIDRO Managing Director Khodadad Gharibpour last week announced that projects worth $3 billion are planned to be inaugurated in Iran’s mining sector in the current year.

The official has previously announced that projects worth $2.17 billion have been put into operation in this sector during the past year.

He said 20 projects implemented by IMIDRO in the previous year created 4,440 direct jobs and 25,300 indirect jobs.

The deputy industry and mining minister also said that the projects were implemented through cooperation of private sector.

As previously announced by the Public Relations Department of IMIDRO, the organization intends to renovate 5,000 economic units using 100 trillion rials (about $2.38 billion) of investment during the current year.

As well as renovating economic units, reviving small mines and expansion of exploitation activities stand among the top priorities of IMIDRO in this year.

Iran is one of the top 10 mineral-rich countries where 68 types of minerals have been identified so far, including the world’s largest deposits of copper, zinc and iron ore, which are tempting international investors.