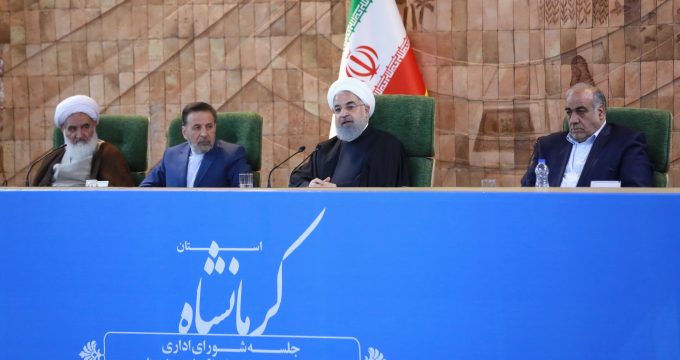 FNA – Iranian President Hassan Rouhani stressed the need for the further strengthening of the country’s defense capabilities, saying that Tehran does not take permission from anyone to this end.

President Rouhani made the remarks in Kermanshah province’s Administrative Council late on Wednesday.

“The enemy is seeking to induce tough and hard conditions in the country while it has false imaginations in this regard,” he said.

The country and government belong to people, Rouhani said, adding, “The government makes its utmost efforts to render quality services to the noble nation of Islamic Iran. Today, we are witnessing unity and amity among all walks of life in the country.”

Enemies have dragged the country to an all-out economic and psychological war and people also know that their government has not been the initiator of this economic war waged by the United States against the country, he said.

“Today, the government will move the country out of difficulties successfully with the unity and amity of people,” Rouhani added.

Then, five days later, former Lieutenant Commander of the Islamic Revolution Guards Corps (IRGC) Brigadier General Hossein Salami said that if Western powers sought to limit Iran’s missile power, the country would have no option but to expand its potentials in the strategically important field.

Salami, who is now the IRGC top commander, made the remarks on February 3, when he reiterated that Iran’s strategy to maintain a cap on its missile power would change if the European Union and others sought to force the country into disarmament.