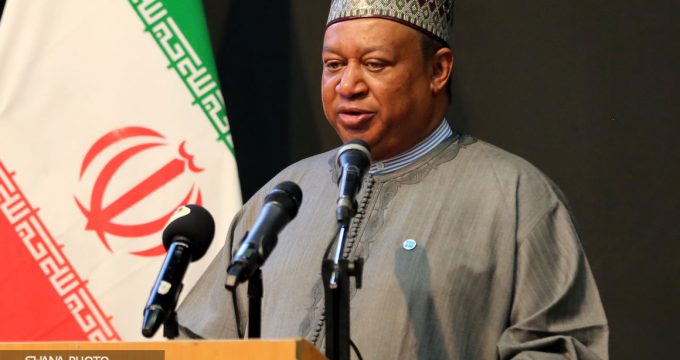 OPEC tries to depoliticize oil, the producer group’s secretary-general was quoted by the Iranian oil ministry as saying on Thursday, following accusations by Iran that the United States is using oil as a weapon against Tehran.

President Rouhani opened 12 construction and infrastructural projects in Kermanshah Province during his visit to the province on Wednesday.

An Iranian oil tanker carrying over 1 million barrels of fuel oil suffered a malfunction in the Red Sea off the coast of Saudi Arabia, authorities said Thursday, raising concerns that the vessel could be leaking.

Permanent Mission of the Islamic Republic of Iran to the United Nations condemned US efforts to force others to violate UN Security Council resolution 2231, saying that the US policy is ‘truly a destructive and hypocritical’.

President: No choice but to withstand enemy’s idle talks

President Hassan Rouhani said on Wednesday that there is no choice but to resist illegitimate and illogical demands as well as idle talks of the enemies.

Oil Minister Bijan Namdar Zanganeh has denied rumors that gasoline rationing would start from today (May 2).

It is impossible to eliminate Iranian oil from the global market, OPEC Secretary-General Mohammad Barkindo was quoted as saying by Iranian oil ministry’s news agency SHANA on Thursday.

Turkey is not able to diversify its oil imports easily, Foreign Minister Mevlut Cavusoglu said on Thursday after the United States waivers on oil purchases from Iran sanctions ended.

Defense collaborations between Iran and Iraq makes the region balanced, peaceful, stable and secure, said the Minister of Defense Brigadier-General Amir Hatami on Thursday in a meeting with a numbr of Iraqi commanders.