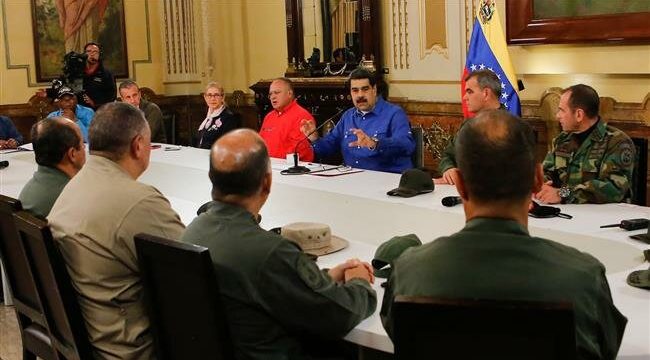 Press TV – Venezuelan President Nicolas Maduro says a coup attempt by a small group of the military has been defeated, expressing gratitude to the country’s armed forces for their continued loyalty to him.

Sitting alongside senior military and political leaders, Maduro said in a televised speech late on Tuesday that the group of military personnel supporting opposition figures Leopoldo Lopez and Juan Guaido had been defeated.

“The empire seeks to attack and overthrow a legitimate government to enslave Venezuela,” Maduro said. “I want to congratulate the Military High Command for its courage in defending peace.”

He said Guaido and Lopez were seeking to spark an armed confrontation that might be used as a pretext for foreign military intervention, but “loyal and obedient” members of the country’s armed forces had put down the mutiny within hours after it started early on Tuesday morning.

“I want to congratulate you for the firm, loyal and courageous attitude with which you have led the defeat of the small group that tried to fill Venezuela with violence,” Maduro added.

He said that there only remained a small group of plotters who had chosen “the path of betrayal … [and] handed their souls over to the coup-mongering far right.”

During the coup, Guaido, who has declared himself “interim president” of the country, claimed in a video message recorded at an unknown location that Maduro no longer enjoyed the backing of Venezuela’s armed forces.

‘Because the people of Venezuela want peace’

Guaido also claimed that “a peaceful rebellion,” not an attempted military coup, was underway and called on people to take to the streets on Wednesday to continue what he called the final stage of “Operation Freedom.”

Early on Tuesday, a group of Venezuelan armed troops accompanying Guaido clashed with soldiers at an anti-government rally in the capital, Caracas. Gunfire was heard, and more than 100 people were reported wounded.

The administration of US President Donald Trump, which has recognized Guaido as the “president” of Venezuela,” quickly backed the putsch bid.

US Secretary of State Mike Pompeo alleged that Maduro had been prepared to fly into exile in Cuba but was talked down by Russia.

“He had an airplane on the tarmac. He was ready to leave this morning as we understand it, and the Russians indicated that he should stay,” Pompeo told CNN, without offering any evidence.

Maduro dismissed the allegation, saying, “Mike Pompeo said… Maduro had a plane ready to escape to Cuba and that the Russians prohibited me from leaving.”

“Mr. Pompeo, please! Such a lack of seriousness! Mr. [John] Bolton (the US national security adviser) gave orders to high-ranking officers to join the coup that was overcome in Venezuela… Dear God, how far will the US go?” the president exclaimed.

Bolton also appeared in the grounds of the White House on Tuesday, naming three senior Venezuelan officials whom he said had been negotiating with the opposition and accepted that the president had to be replaced. He alleged that Venezuela’s Defense Minister Vladimir Padrino was one of them.

Padrino, however, appeared on television surrounded by soldiers on Tuesday, asserting continued loyalty to Maduro.

Meanwhile, reports said opposition figure Lopez — who was reportedly set free from house arrest during the coup — took refuge at the Spanish Embassy in Caracas with his family.

Lopez said earlier that he had been freed by soldiers guarding his home.

Trump on Tuesday accused Cuban “Troops and Militia” of conducting military operations in Venezuela to cause “death and destruction to the Constitution of Venezuela.”

In a Twitter message, Trump threatened Havana with a “full and complete embargo, together with the highest-level sanctions” if it did not pull those forces out of Venezuela.

Cuba has supported Maduro’s elected government but has denied US accusations that it has military and intelligence operatives in Venezuela.

Juan Guaido, Nicolas Maduro, Venezuela crisis May 1, 2019
Iran’s Rouhani says US oil sanctions will fail in practice
By executing 2030 agenda, they seek to train soldiers for US and UK: Leader