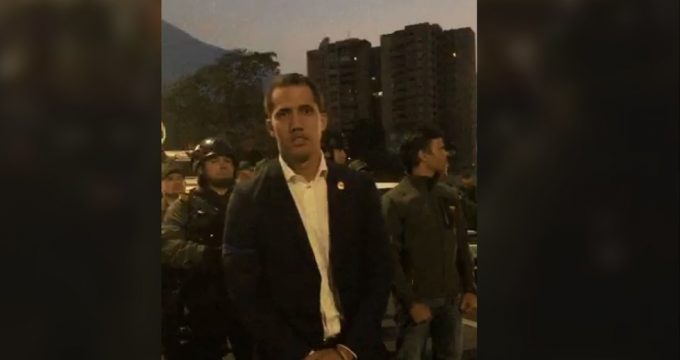 RT – Self declared Venezuelan ‘interim President’ Juan Guaido has called for a military uprising in a video shot at a Caracas airbase. In the video he is accompanied by a number of soldiers, and detained activist Leopoldo Lopez.

“The moment is now,” Guaido declared standing near heavily armed soldiers and an armored vehicle.

The three-minute video was shot ahead of a planned anti-government rally on Tuesday, in which Guaido said that the soldiers deployed into the streets would be acting to “protect Venezuela’s constitution.”

Guaido had earlier claimed on Twitter that he was meeting with “the key military units” of the Venezuelan army as “the beginning of the final phase of Operation Freedom.”

Maduro spokesman confirms coup underway in Venezuela. Says ‘small number of military’ have joined forces with the opposition. Numbers not yet clear. https://t.co/yYFgm5ApYZ