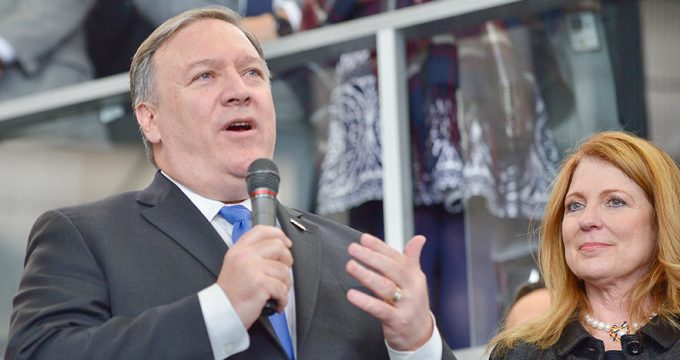 Press TV – United States Secretary of State Mike Pompeo has defended US support for the Saudi-led war on Yemen, saying it is ‘in America’s best interest”.

“The support we’re providing to the Saudis as they attempt to engage these dangerous missiles systems is in America’s best interest,” said Pompeo, according to the The Hill on Monday.

Pompeo made the comments in reference to missile attacks launched by Yemen’s popular Houthi Ansarullah movement, which is defending the country against the Saudi-led invasion.

Seeking to deter the Saudis from further attacks, Ansarullah has targeted a number of strategic Saudi installations, including airports.

“Airplanes flying through King Khalid International Airport in Riyadh are at risk, and the United States has an obligation to protect our citizens,” said Pompeo.

The US has been generously providing arms support for the kingdom and its allies during their onslaught against Yemen. Washington has also provided the coalition logistical assistance, including bombing coordinates.

Washington’s support for Riyadh’s war, however, has come under increasing scrutiny in Congress ever since the murder of Saudi journalist Jamal Khashoggi at the kingdom’s consulate in Istanbul, Turkey last October.

Earlier this month, the US President Donald Trump vetoed a congressional war powers resolution against US support for the war. Backers of the resolution believe the American involvement is an act of war and, therefore, needs approval from Congress.

Last week, senior US Senator Bernie Sanders, who originally co-sponsored the anti-war resolution, wrote a letter to fellow Senators urging them to override Trump’s veto in a bid to “protect” Congress’s constitutional authority.

The Senate is expected to act on Trump’s decision later this week, according to Senate Majority Leader Mitch McConnell. It is, however, not clear what type of vote will be made in response to the veto.

Saudi Arabia and a number of its regional allies launched the devastating campaign against Yemen in March 2015, with the aim of bringing the former Saudi-sponsored government back to power.

Earlier this month, the Armed Conflict Location and Event Data Project (ACLED), a nonprofit conflict-research organization tracking casualties in Yemen, announced that the death toll from the Saudi-led war surpassed 70,000 deaths, with more than 10,000 being killed in the five last months alone.

The war has also taken a heavy toll on the country’s infrastructure, destroying hospitals, schools, and factories.

The UN has warned that a record 22.2 million Yemenis are in dire need of food, including 8.4 million threatened by severe hunger. According to the world body, Yemen is suffering from the worst global famine in more than 100 years.