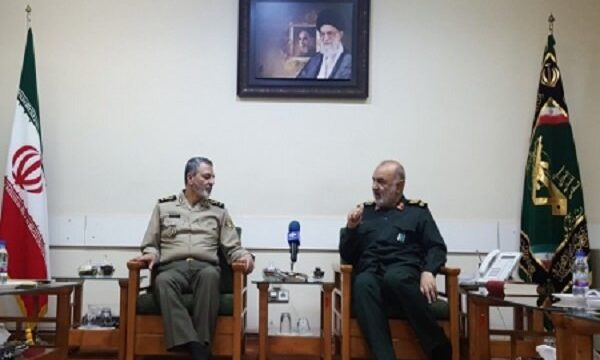 MNA – The chief commanders of the Islamic Revolutionary Guards Corps (IRGC) and the Amy held a meeting, during which they stressed coordination and unity among the ranks of their forces.

According to the IRGC news website ‘Sepahnews.ir’, after the appointment of Major General Hossein Salami as the IRGC chief commander, the Commander of Iran’s Army Major General Seyed Abdolrahim Mousavi visited the IRGC central command in Tehran on Monday.

During the meeting, the IRGC chief commander described the IRGC and the Army as two powerful arms of the Islamic Revolution and the Establishment, stressing that ‘horizon for cooperation and coordination between the two organizations is very clear due to their shared understanding of the threats and dangers.’

Salami described the unity between IRGC and Army as ‘exemplary’, declaring that the unity will grow day by day.

The Army commander, for his part, said that “since the Islamic Revolution over the forty years, the Army and the IRGC have focused their efforts on increasing unity and on common goals, the unity and cooperation between the two forces is increasing on a daily basis.”

Mousavi added that in line with the instructions of the commander-in-chief of all armed forces, the unity between the IRGC and Army should increase during Major General Salami’s term as the IRGC chief commander.