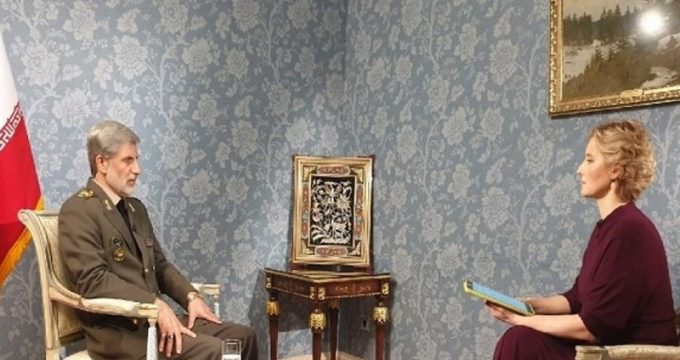 Tasnim – Iranian Defense Minister Brigadier General Amir Hatami highlighted the country’s power to protect its vital interests in the Strait of Hormuz, saying Iran’s dominant position in the strait is not founded on naval vessels alone, but involves missile capabilities as well.

“We have the power to protect our vital interests in this strait (Hormuz) and make the necessary decisions in a timely manner,” Hatami said in an interview with RT.

He also noted that Iran is a littoral country near the Strait of Hormuz and its power is not confined to vessels.

“We have other powers, including the missile power and several other ones, so that we can make the necessary decisions in due time and perform them strongly,” the minister underlined.

The general also condemned the US administration for its hostile policies and sanctions against Iran and for violating international laws, and reminded Europe of the heavy costs it bore during the Second World War because of its delay in combatting the threat of Adolf Hitler.

“The world will definitely be careful a new Hitler would not plunge the world into big troubles,” he added.

General Hatami further highlighted the close cooperation between Iran and Russia in Syria, saying, “We had successful partnership with Russia together with the Syrian government and people in the fight against terrorists, and we’ll surely have the same cooperation in the (Syria) reconstruction period too, which will serve as a model for the world.”