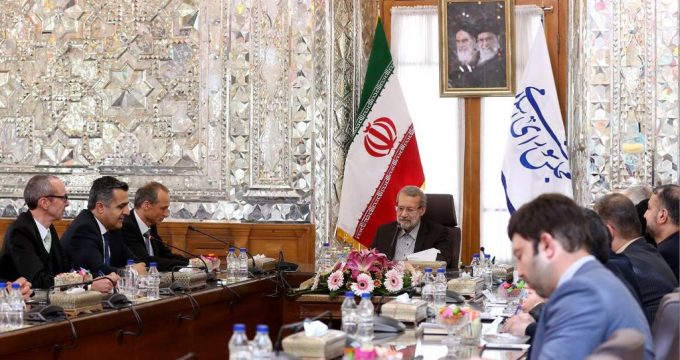 He said that the European Union has failed to honor promises and obligations the bloc of European states undertook in the context of the United Nations Security Council Resolution 2231, adding that EU should not expect Iran to go along with its demand.

Addressing a meeting with chairman of Iran-Austria parliamentary friendship group Wolfgang Gerstl, Larijani said that Iran and Austria enjoy longstanding relations and that despite the fact that US President Donald Trump has deteriorated the situation, Austria has played effective role regarding Iran nuclear deal known as the Joint Comprehensive Plan of Action (JCPOA), so that amount of trade has increased.

He added that the European Union has so far taken some measures but has been left at the middle of the road.

Larijani criticized the EU for driving economic cooperation with Iran to abeyance after Trump withdrew US from JCPOA.

Europeans said that they would create Special Purpose Vehicle (SPV) for economic and petroleum interactions and afterwrads they launched the Instrument in Support of Trade Exchanges (INSTEX), Larijani said, adding that none of them became practical.

Even Austria which was Iran oil buyer did not continue its cooperation, he said adding that the European Union credibility has undergone a big question meaning that it has not been able to solve problems.

Despite the fact that Iran had boosted its relations with Austria to 700-800 million dollars, it has stopped at the moment, Larijani said.

Referring to money laundering law which was ratified in parliament, he said the European Union played no effective role in this case.

Meanwhile, Gerstl said the President of the Austrian Parliament Wolfgang Sobotka has prepared the opportunity for holding a conference in 2020 with the attendance of parliament speakers.

Underlining the role of parliament in transition of power, he said Austria and the European Union expressed regret over the US withdrawal from Iran nuclear deal.

He urged Iran and Europe to comply with their commitments to use nuclear energy for peaceful purposes and its application for welfare and convenience of the people.

He went on to say that international relations are interlinked with the economic and security issues.

Thanks to the domination of free market economy in Europe, the European Union has no executive power regarding economic enterprises and the body is just able to facilitate the framework of relations, Gerstl said.

Earlier, Iranian Ambassador to France described Iran’s nuclear deal as the outcome of a successful, efficient and effective diplomacy in a complicated situation.

He further termed the JCPOA as a historic and effective achievement which was agreed by two years negotiations with the UNSC member states plus Germany.

Iranian deal showed that diplomacy is the art of overcoming some problems to prevent war and tension, he added.