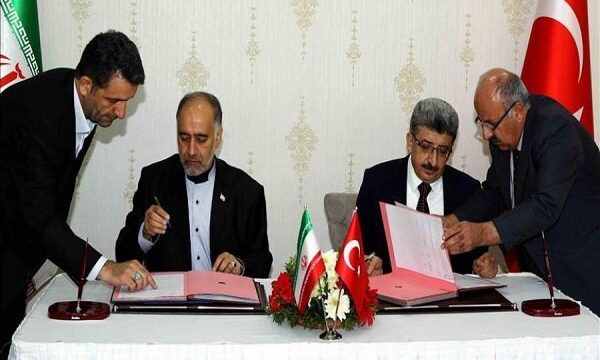 MNA – Iranian and Turkish delegations signed a Memorandum of Understanding to boost boarder security between the two sides in province of Van, eastern Turkey.

Meetings and talks between the two sides were chaired by the governor of province of Van, Turkey Mehmet Emin Bilmez and the governor of Khoy city, West Azerbaijan province, Seyyed Mohammad Abedi, who discussed issues such as border security and the fight against smuggling and terrorism.

At the 53rd meeting of the border security of Turkish and Iranian delegations, Bilmez stressed resolving border problems, and hoped that mutual cooperation would expand security on the borders between the two countries.

Van shares 285-kilometer of common border with Iran, which necessitates the facilitation of citizens’ entry and exit and also the resolution of border trade problems between the two countries, Bilmez added.

Abedi, Govenrnor of Khoy, also said that the border security agreement between Turkey and Iran is crucial in combating terrorism and smuggling and trespassing.

Iran and Turkey share 566 kilometers of common border, the vast majority of which are mountainous and non-hospitable terrain. The geographical conditions of the two sides of the border limit the possibility of crossing the border, especially in the cold months of the year.