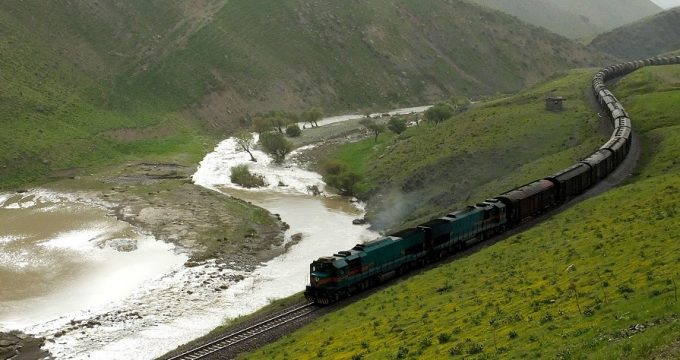 Alwaght – Iran, a regional power, has been working hard to thwart the effects of the US sanctions on its economy as the US President Donald Trump after his May 2018 withdrawal from nuclear deal with the Islamic Republic sought to maximize the stains on Tehran to isolate it economically. One path Iran is going to realize its goal is an effort to get access to the Mediterranean Sea by pushing with a railroad project linking the Persian Gulf to the Mediterranean.

According to the experts, the railroad transit, among other ways, is presently the cheapest and most cost beneficial. With regard to its geopolitical and geographical position, Iran is the best transit route and provides the best ground to expand regional freight rail network.

Iraqi Republic Railways has recently declared that it conducted talks with Iran and Syria to develop a rail route linking Iran’s Shalamcheh in the south to Iraq’s Basra and then Syria. The project’s intent, it is said, is to link the Persian Gulf to the Mediterranean in which these three countries are central.

Iran and Syria have recently signed a number of long-term strategic cooperation partnership agreements in the industry, trade, and agriculture. To this end, the two countries’ officials have called for a railroad connecting the two regional allies. This comes while the two countries are considering ways to expand trade partnership and rebuild Syria after an 8-year war of terrorism that destroyed much of the Arab nation’s infrastructure.

In an e-mail to the Al-Monitor news website in December 2018, the Syrian minister of transportation said that railroad is part of a roadmap to reconstruct the country’s infrastructure which has been destroyed in the war. Syria has an initial plan to build a 32-kilometer-long railroad. The rest of it will continue in Iraq and then Iran to facilitate goods transfer between the three countries.

Prior to Tehran-Damascus rail link negotiations, Iran and Iraq had reached agreements for railroad link. Adul Ali Mohammadi, former head of the Islamic Republic of Iran Railways, told of a rail route linking Iran’s Kermanshah to Baghdad through Khosravi and Khaneghein border towns of the two countries. According to Bagher al-Zubaydi, former Iraqi railroad company’s chief, there is a plan to also build a 32.5-kilometer-long railway from Shalamcheh to Basra. He said that in addition to facilitating passenger transfer, the line will link Iraq to many world countries and can be called as part of the ancient Silk Road revival. In addition to agreements with Iran, Iraq has plans to link itself through railroad to Jordan and Turkey, both neighboring countries.

Shalamcheh-Basra rail route, which is the first phase of a massive project, was finalized last month between Tehran and Baghdad. It will cost some $2.22 billion, the informed sources have said. Once this link is built, it will be easier to access the Syrian Mediterranean port of Latakia. Iraq-Iran trade exchange, which covers food, machines, gas, and electricity, is thriving with its volume reached $8.7 billion in 2018. The neighbors aim to expand their business to $20 billion in the near future.

On the other hand, considering Europe’s increasing need for energy, one reason for Iraq to link itself through rail line to the Mediterranean is the expansion of trade with the European countries. On April 16, an Iranian parliamentary official said that the Persian Gulf-Mediterranean railroad is a supplement to North-South Railroad. According to the lawmaker, through the project, Iran could export goods to Europe via Azerbaijan.

Three years ago, Iran was given a link to a project intended to connect the Persian Gulf to Europe. The project is now underway after getting the approval of Iraq and other regional states. As part of the project, Tehran has recently signed a deal with Baghdad and Damascus to build a 1700-kilometer-long highway, planned to be completed within two years.

In today’s world, railroad is a strategic infrastructure. That is what motivating China, an emerging economic power, to strive to dominate the main global trade hubs in order to set up its politico-economic influence in the future. This dream is sought in the ambitious “One Belt, One Road” project, sponsored by Beijing.

In the meantime, what is understood from the Iranian, Iraqi, and Syrian officials is that the Persian Gulf-Mediterranean rail route is a continuation to the Chinese initiative. Syria’s ministry of railways also pointed to this. In an e-mail sent to Al-Monitor, it said that the three-party railroad is part of a greater project linking to Central Asia and also China and Russia. The ministry highlighted Damascus intention to join the Silk Road project.

Syria’s Al-Watan newspaper, citing informed sources said that an agreement was signed with “the Chinese party” to join the three-nation rail link. It continued that it was expected that the railroad crosses Syria, Iraq, and Iran and continue to Pakistan. The project’s length will be 165 kilometers in Syria, 160 kilometers in Iraq, and 170 kilometers in Iran.

The Iranian authorities also confirm the information surrounding the matter. Amir Amini, the head of planning and sources management at Iran’s ministry of roads and urban development, in June 2018 said that should the three-nation rail project is completed, it will mark an essential step towards a link to the Chinese rail network.

Although China’s rail link to the Mediterranean through Iran is the shortest and cheapest way, it is not the only way available. The huge benefits of the project also temp the Israeli regime to seek a trade rail link. Tel Aviv now considers the construction of a railroad linking Haifa port city in the occupied territories to the Persian Gulf.

The “peace train” is an enterprise that is meant to link the north Israeli port city to Jordan, Saudi Arabia, and other Sunni Arab states.

On November 8, 2018, the Israeli Minister of Transportation Yisrael Katz visited Oman for a transport conference in Muscat. During the visit, he presented the Arab representatives with a plan to link via rail the occupied Palestinian territories to the Persian Gulf Arab countries.

However, as the US feels the risks of the Chinese international economic expansion to its declining politico-economic hegemony, Washington embarks on a campaign of pressure to persuade the Israeli regime to scale down its business partnership with Beijing. Such a concern reflected itself in a recent warning by Trump to Israeli Prime Minister Netanyahu. Trump told Netanyahu that expanded partnership with Beijing could hurt Washington-Tel Aviv security cooperation. The US dissatisfaction with China-eyed project may also lead to efforts to obstruct the Iran-Iraq-Syria rail route.