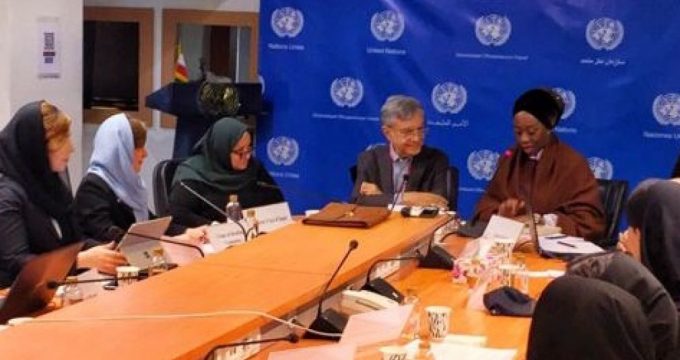 United Nations Iran – The UN Information Centre (UNIC), in cooperation with the Iranian Association for UN Studies (IAUNS), organized a Model UN Conference (MUN), simulating a session of the UN International Law Commission (ILC) at the UN Office in Tehran on 24 April 2019.

The theme of the simulation was “Immunity of State Officials from Foreign Criminal Jurisdiction”, with a focus on the 3378th meeting of the ILC (20 July 2017). Some 30 students of International law under the chairpersonship of Professor Djamshid Momtaz (emeritus professor of University of Tehran, judge ad hoc of the International Court of Justice and the former member and Chairperson of the ILC (2000-2006)) played the role of members of the ILC, as persons of recognized competence in international law.

The session started with opening remarks from UN Resident Coordinator, Ms Ugochi Daniels. She welcomed Dr. Momtaz, Dr. Nasrin Mosaffa and the other distinguished professors, as well as all participants of the MUN.  She emphasized the usefulness of the MUN exercise, stating: “I am confident that even if you do not become a lawyer or jurist, you will use this experience in your future career.” Afterwards, the president of IAUNS, Dr Mosaffa, delivered her remarks and thanked UNIC for its continued cooperation with the Association.

At the beginning of the simulation, Professor Momtaz briefly reviewed work of the ILC on the Draft Articles on “Immunity of State Officials from Foreign Criminal Jurisdiction” and asked the Special Rapporteur to deliver her report on these Draft Articles (Draft Article 7, in particular). Other members of the Commission raised their comments on the report prepared by the Special Rapporteur, including the exceptions to immunity ratione materiae, the relationship between universal jurisdiction and immunity, the extent of immunity ratione personae, etc.

At the end of the session, the Chairperson asked for a vote. He concluded his remarks with reference to the most important challenges that now exist in respect to the topic of “Immunity of State Officials from Foreign Criminal Jurisdiction”. This topic has been on the agenda of the ILC since 2006.

Participants of the MUN

All the participants were very happy and satisfied to be able to represent the prestigious role of an ILC member in a session with the Chairpersonship of the former Chairperson of this Commission of the UN General Assembly.