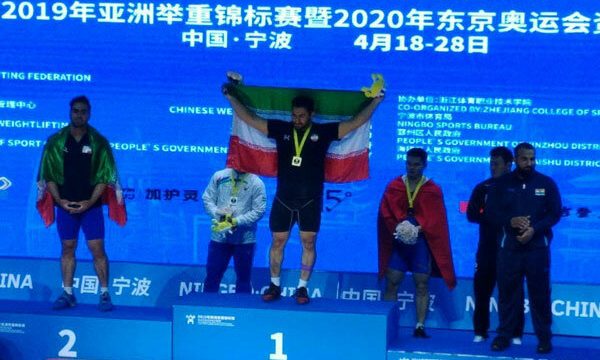 Also in the same category, Iran’s Alireza Hoghoughi won silvers of clean and jerk and overall with hoisting 215 and 384 kilograms respectively.

Earlier in the day, Ali Miri, in men’s 89kg, lifted 161kg in the snatch and 205kg to end on a total of 366kg collecting the silver medal of overall, also gaining one bronze in snatch and one silver in clean and jerk. South Korea’s Yu Dong-ju snatched the gold medal with an overall of 367kg.

And Ayoub Mousavi won the overall silver medal of men’s 96kg category with a total of 373kg. He gained a bronze medal of sntach with 165kg and silver of clean and jerk with 207kg. China’s Tian Tao won gold medal of this category.

The 2019 edition of Asian Weightlifting Championships kicked off in Ningbo, China, on April 20 and it will wrap up on April 28.