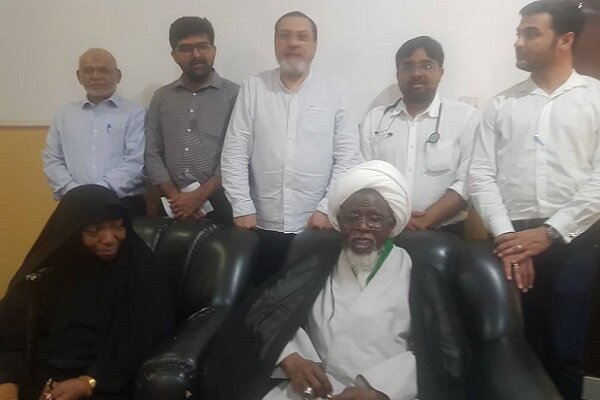 MNA – Iranian Foreign Ministry Spokesman has welcomed the Nigerian government’s ‘positive move’ to permit a medical team to visit and examine Sheikh Ibrahim Zakzaky, the leader of Nigeria’s Shia community, and his wife.

In a Saturday statement, Seyed Abbas Mousavi expressed hope that with Sheikh Zakzaky and his wife receiving full treatment inside or outside Nigeria, the trend of interaction and constructive talks between authorities of the Islamic Movement in Nigeria (IMN) and the Nigerian government will result in the settlement of problems and the release of the top cleric, reported the official website of Iran’s Foreign Ministry.

A group of medical experts and consultants has completed on Thursday its initial health assessment of Nigeria’s top Muslim cleric Sheikh Ibrahim al-Zakzaky and his wife, who have been in detention since late 2015.

The delegation led by UK-based Islamic Human Rights Commission (IHRC) visited the cleric and his wife, Mallima Zeenah, on Thursday and highlighted the need for urgent investigations into their health which it hoped would be carried out in the next couple of days.

The IHRC, an NGO which campaigns for justice, said in a statement it “acknowledges the authorities’ change of position in making this possible and hopes this heralds a full and just resolution of the situation.”