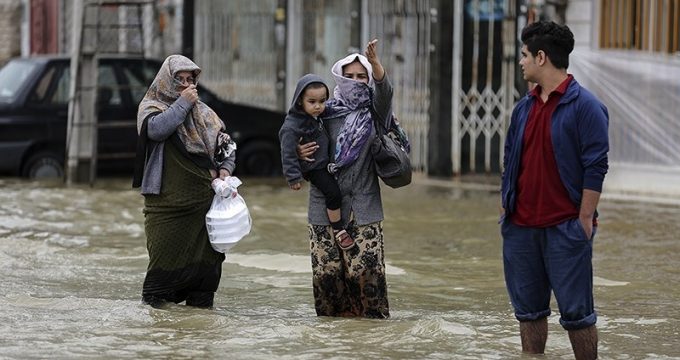 FNA – A senior Army official in the Northern province of Golestan said that no danger is threatening the town of Aqqala which was severely damaged in the recent floods in Northern Iran.

“Fortunately, no danger threatens Aqqala at present and people should not be concerned,” Commander of the Army’s Brigade 230 in Golestan province Mohammad Ali Saeed Asgari told reporters on Saturday morning.

Meantime, Governor of Aqqala Amangaldi Zamir said that the debit of water flowing from Voshmgir dam has decreased from 135sqm/s to 90sqm/s, adding that less water is pouring into Gorganroud now.

Also, Caretaker of Golestan province’s governor-general office MirMohammad Qaravi told reporters that the executive bodies along with the Islamic Revolution Guards Corps (IRGC) and popular forces are building a new canal in the region to prevent flood in Aqqala again.

In another front, the head of Aqqala’s Red Crescent Society announced that 11 centers have been prepared for the local people’s temporary sheltering.

Also, the director-general of Golestan province’s Red Crescent Society said that 39,529 food packages and 9,464 hygiene packages have been sent to the flooded areas in the province and were distributed among people.

Aqqala was one of the first towns in Iran which was nearly drowned in the heavy floods across the country late in March. New showers had raised concerns that the town will be flood-stricken again.

Unprecedented rainfalls since March 19 triggered disastrous floods in Iran. The tragedy started in the four Northern provinces of Mazandaran, Golestan, Semnan and North Khorassan on March 20. Thirty provinces of Iran have been hit by severe weather conditions since then.

Earlier this month, the Iranian Red Crescent Society announced that Tehran had not been able to receive any foreign financial aid because of Washington’s “inhuman” sanctions against the country.

“No foreign cash donation has been made to the Iranian Red Crescent Society yet and basically there are no financial channels available to do this,” the IRCS said in a statement on April 7.

“Some institutions and countries have expressed their readiness to donate and also declared certain sums of money; but as a result of the inhuman US sanctions, there is no way to send this cash assistance” to Iran, the statement added.

The IRCS emphasized in another part of its statement that despite US officials’ claims, Washington’s sanctions have caused difficulties in the way of helping people affected by flooding and influenced logistical capacities, particularly air relief.

The IRCS has not been able to buy new aid helicopters due to the unilateral sanctions imposed by the US and is also facing difficulties for buying spare parts to maintain its existing aid helicopter fleet, the statement added.

Official accounts are confirming that so far 76 lives have been claimed by the recent floods in Iran, while hundreds of thousands have been left homeless.