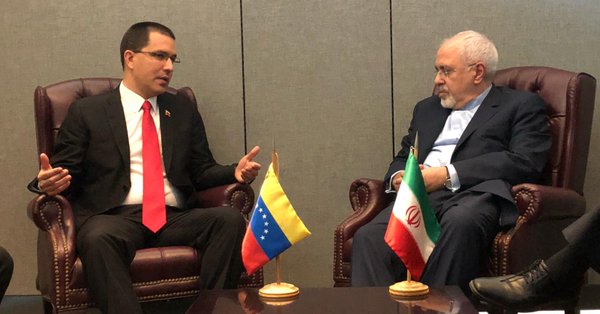 MNA – Iranian Foreign Minister Mohammad Javad Zarif on Wed. met with his Venezuelan counterpart Jorge Arreaza on the sidelines of a meeting on multilateralism in New York.

In the meeting held on Wednesday afternoon in New York, the Iranian Foreign Minister Mohammad Javad Zarif and Venezuelan Foreign Minister Jorge Arreaza conferred on bilateral issues, as well as international issues such as the US unilateralism.

In the meeting, the Iranian top diplomat emphasized Iran’s continued support for Venezuela and called for non-intervention in that country.

He noted that Iran is continuing its efforts to develop economic relations with Venezuela.

The Venezuelan foreign minister, for his part, expressed his gratitude to Iran’s support for his country, and explained to Zarif Venezuela’s extensive diplomatic efforts to counter cruel invasion of some countries led by the United States, and their painful intervention in Venezuela’s internal affairs.

Arreaza noted that Venezuela is in a stable position, and Maduro’s legitimate government has full control over the country. He pointed out that the majority of people in Venezuela oppose the US intervention, so that the people’s support for the government is increasing.

He described the opposition groups as the US puppets, saying they are not allowed to represent the people of his country to hold negotiations.

The two top diplomats also emphasized the need for coordination and continuation of consultations between the two sides.

Zarif was in New York yesterday to attend a UN conference dubbed ‘the International Day of Multilateralism and Diplomacy for Peace.’