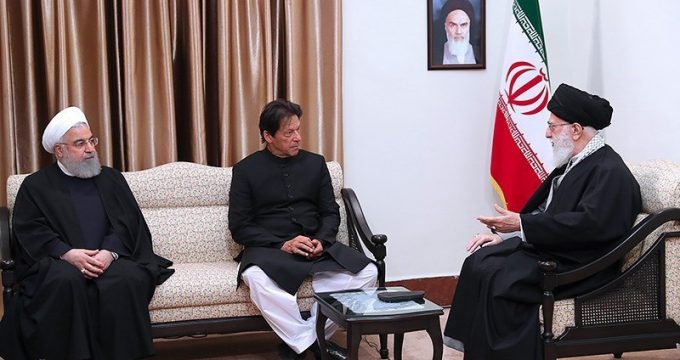 IRNA – The Pakistan’s prime minister visited Iran at a crucial juncture in Tehran’s foreign policy and special conditions for the Pakistanis.

However, the achievements of this trip can be described as impressive.

Imran Khan, who had started his trip on Sunday, April 21, with the pilgrimage of Imam Reza (AS), the 8th Shia Imam Shrine in Mashad, was officially welcomed by President Hassan Rouhani in Tehran on Monday. After talks with Rouhani and attending a joint press conference with the president, he was received by Supreme Leader of the Islamic Revolution Ayatollah Seyyed Ali Khamenei.

After meeting with the authorities of our country, the Pakistani PM left Tehran to Islamabad to continue with further efforts, as he himself said, in order to further strengthen the relations between the two countries and to remain in constant touch with Tehran.

According to analysts, this positive approach, along with agreements between the two sides in various areas, will lead to a dramatic expansion of Iran-Pakistan relations in various political, security, economic and other spheres.

** The Importance of Imran Khan’s Trip to Tehran

The visit of the Pakistani Prime Minister to our country and the emphasis of the two sides on the development of lasting relations is very important in the particular circumstances of the region.

From analysts’ point of view, the talks, agreements and statements of Imran Khan make clear messages for the countries of the region and, of course, the United States and regional allies of Washington.

Imran Khan chose Tehran as the destination of his tenth foreign trip, in the circumstances that the scope of US sanctions against our country is expanding exponentially and other countries are under pressure by Washington to accompany anti-Iranian sanctions.

On the other hand, the destructive activities of terrorist groups supported by foreign enemies on the common borders of Iran and Pakistan continue to endanger our country’s interests and security.

Due to the activity of similar groups against India, the subcontinent once again experienced a tension in relations between Delhi and Islamabad; a tension that has now fallen, but as the fire under the ashes can still flame.

The trip also took place during the Saudi’s strive for massive investment in Pakistan. Riyadh pursues goals such as reducing regional power of Iran, with Pakistan’s economic needs and challenges, through promise of widespread investment in the country. During a recent Saudi Crown Prince Mohamed Bin Salman’s visit to Islamabad, contracts worth $ 20 billion were signed between the two countries for the investment of Riyadh in Pakistan.

Awareness regarding the undeniable necessities of neighboring countries, along with a wide range of shared interests and threats, and extensive ties of history, culture, religion of the two countries, have resolved Tehran and Islamabad to keep their connections threaten by the animosities and suspicious movements of enemies.

In fact, this trip can be considered an attempt to act as a necessity, which was emphasized during the meeting with Imran Khan, with the Supreme Leadership of Islamic Revolution stressed that ‘the relations between the two countries should be strengthened and consolidated in spite of hostilities’.

This concept is in the remarks of Imran Khan Was also considered. The Pakistani PM also said in the meeting that some do not want the ties between Tehran and Islamabad to come close to each other, but we can overcome the difficulties, saying ‘we are trying to strengthen the relations between the two countries and we will continue to get in touch with the government of the Islamic Republic of Iran.’

Iran’s president remarks at the meeting with Imran Khan that ‘Iran and Pakistan are fully committed to the development of bilateral relations, and no third country is able to affect the friendly and fraternal relations between Iran and Pakistan’ also observes the principle of peaceful cooperation to promote the interests of the two countries.

With this approach, various meetings and discussions between Imran Khan and our senior officials have led to wide-ranging agreements in various political, security and economic fields, whose implementation will lead to the strengthening of relations between Tehran and Islamabad.

Terrorism as one of the most important issues that binds the security interests of Tehran and Islamabad, was the focus of Imran Khan’s multi-faceted consultation with Iranian officials.

The enemies of Iran have been trying to use the terrorist groups as a means to disrupt Tehran’s relations with Islamabad for many years. The occurrence of terrorist operations along the border between the two countries on the eve of the trip of the prime minister of Pakistan is an example of this effort, which has never led to the desirable outcome with Tehran and Islamabad’s vigilance.

Imran Khan, in talks with our country’s officials, announced Pakistan’s resolve to respond to Iran’s demand for confrontation with terrorist groups. Imran Khan, in a news conference with the president of the country, referred to the ‘terrorism issue’ as the main reason for his trip to Iran, that was as crushing blow to the supporters of the terrorists.

The Pakistani PM’s emphasis that all political groups in the country have come to the conclusion that we should not allow militant groups from Pakistani territory to use terrorist acts against other countries, shows Pakistan’s serious will to confront terrorist groups; the will It seems that its operational and common mechanisms are defined on this trip.

During the visit, Iran and Pakistan set up mechanisms for expanding security cooperation and border forces. In this regard, the president of our country has announced the formation of ‘rapid reaction forces’ at joint borders to fight terrorism.

Earlier, Pakistani Foreign Minister Shah Mehmood Qureshi had announced a six-way solution to strengthen the security of the borders between the two countries. In this framework, the two countries are set to take action, such as the establishment of the new headquarters of the Army Command in Torbat, Pakistani Balochistan, the formation of a new unit in the border troops, the formation of a common border center, a joint patrol of the two sides of the border, the control of common borders using a helicopter and … improve the security of the common borders.

Analysts say that the implementation of the recent security agreements between the two countries can transform the process of combating terrorist groups along the common borders between Iran and Pakistan.

Another major issue in Iranian-Pakistani talks in Tehran was Tehran and Islamabad’s commercial and economic cooperation.

Given the vast US sanctions and international constraints for foreign financial transfers, Iran’s diplomats and economy policy makers have long been trying to establish separate financial exchange mechanisms for the international system under American domination with their neighbors. Iran has also considered various ways to circumvent sanctions.

In the same vein, after meeting with the Pakistani Prime Minister, our country’s president announced an agreement between the two sides to formulate a clearing committee and to continue the flow of exports and imports and settle it in a separate bank account.

Also, supplying Pakistani oil needs placed on our country’s agenda. According to Rouhani, Iran is ready to provide Pakistan’s oil needs and take the necessary steps to complete the gas pipeline.

For many years, a contract for the purchase of 22 million cubic meters of gas from Iran has been signed between Tehran and Islamabad, but pipeline construction for receiving gas has not yet been completed. Iran plans to operate the contract with the help of completion of the pipeline.

Rouhani also in his meeting with Imran Khan referred to the readiness of Iran to increase the export of electricity to Pakistan by 10 times. Referring to the desire of the two countries to expand trade relations, the president also announced the imminent development of relations between Chabahar and Gwadar ports via rail.

Iran and Pakistan have significant potential for developing business relations, as agreed by the two sides in the 20th Joint Economic Commission of Iran and Pakistan in 2017-18, the volume of Iran-Pakistan trade relations can expand to a capacity of $ 5 billion. Realizing this goal is only possible due to the attention of Tehran and Islamabad officials.