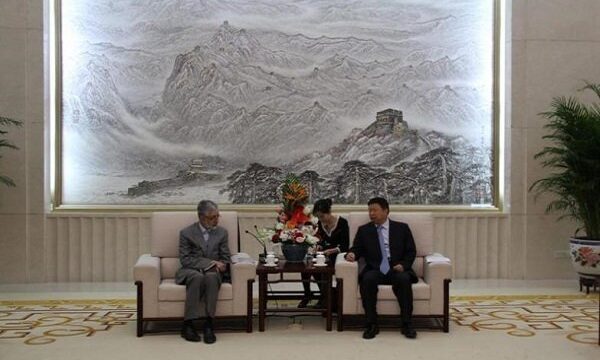 MNA – Gholamali Haddad Adel, a member of Iran’s Expediency Council, underscored the need to boost cooperation between Iran and China in the fight against terrorism.

He made the remarks Monday in a meeting with the Chinese Communist Party’s Minister of the International Department Song Tao in Beijing. Heading a delegation from Iran’s Expediency Discernment Council, Adel is in China to attend the second forum on the Belt and Road Forum for International Cooperation (BRF) from April 25-27.

The Iranian official said that fighting terrorism can be one of the important areas of bilateral cooperation between the two countries, adding, “the implementation of ‘the Belt and Road initiative’ requires peace and stability in the route and the plan cannot be materialized if terrorists are still active in countries such as Afghanistan, Iraq, and Syria.”

He went on to say that Iran is an important part of Silk Road and that the Chinese president’s decision to implement this megaproject is very ‘meaningful’ for the Iranian nation. The Islamic Republic of Iran welcomes and supports this project, he highlighted.

For his part, Song Tao said that Iran and China enjoy great civilizations and were linked together via the Silk Road.

The Chinese official appreciated Iran’s support for the Belt and Road initiative, saying that the participation of high-ranking Iranian delegation from Expediency Council proves the importance of this project for Tehran.

Gholam-Ali Haddad Adel, Iran-China ties, Song Tao April 23, 2019
Iran and Pakistan stress in a joint statement: The two countries’ border should be border of peace, friendship
China lashes out at US over Iran oil sanctions move