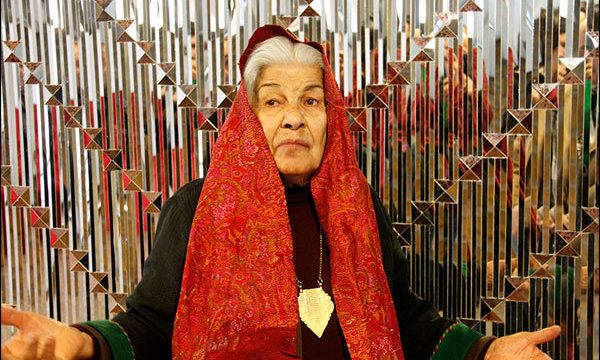 MNA – Iranian prolific artist Monir Farmanfarmaian, who was known for her mirror mosaics and geometric drawings that set records at Tehran auctions, has passed away at the age of 97.

Hailed as one of the most prominent Iranian artists of the contemporary period, Monir Farmanfarmaian passed away at her home in Canada on Saturday at the age of 97.

She was the first artist to achieve an artistic practice that weds the geometric patterns and cut-glass mosaic techniques of her Iranian heritage with the rhythms of modern Western geometric abstraction.

She was born in Qazvin, then moved to Tehran with her family, where she enrolled in the Faculty of Fine Arts at the University of Tehran. Later in life, she traveled to New York state, where she attended Cornell University and Parson’s School of Design.

Aside from her mirror work, Farmanfarmaian is additionally known for her paintings, drawings, textile designs, and monotypes.

Her experiments with mirror mosaics began in the late 1960s after she saw compelling examples of the technique at various sites on her travels. In her work Farmanfarmaian often fused enduring Islamic pattern making and a Modernist exploration of abstract geometric forms, according to Britannica.

In 2017, the Monir Museum in Tehran was opened in her honor.

Her last participation at the Tehran Auction was in January 2019, where the highest bid was placed on an untitled work by her: a 90×180 cm mirror mosaic, reverse-glass painting and plaster on wood, created in 2018, which was sold at a hammer price of 40 billion rials (952,381 USD).

In addition to international auctions and exhibitions, she had taken part at five editions of the Tehran Auction with 10 artworks, which generated a total proceeds of over 47 billion rials for the buyers and sellers.

The film ‘Monir’ (2014) directed by Bahman Kiarostami, is a documentary about Farmanfarmaian’s life and work.