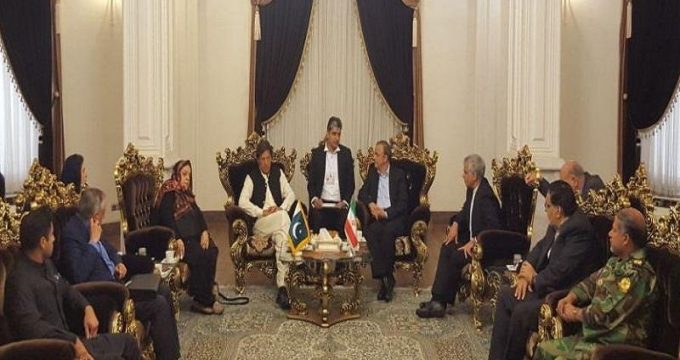 Imran Khan made the remarks Sunday in a meeting with Razavi Khorasan Governor Alireza Razm Hosseini upon his arrival at Mashad international airport.

Pakistan is trying to open doors to foreign tourists so Pakistan tourism minister is accompanying delegation to Iran, he said.

Referring to 100,000 Pakistani pilgrims visiting Mashad, he said three of the accompanying ministers have so far visited Mashad.

He also sympathized with victims of the recent floods in Iranian provinces.

He also pointed to the position of Khorasan in the region and expressed interest to visit Nader shah tomb in Mashad.

Meanwhile, Razm Hosseini elaborated on the economic, tourism and cultural potentials of Razavi Khorasan, saying two million Iraqi and hundreds of pilgrims from other countries like Turkey visit Mashad annually.

Imran Khan embarked on a two-day visit to Iran on Sunday at the official invitation of Iranian President Hassan Rouhani.

His first stop was in the northeastern city of Mashad, home to the mausoleum of Imam Reza (AS), the eighth Shia Imam.